Blaine baseball misses out on regionals after Overlake loss 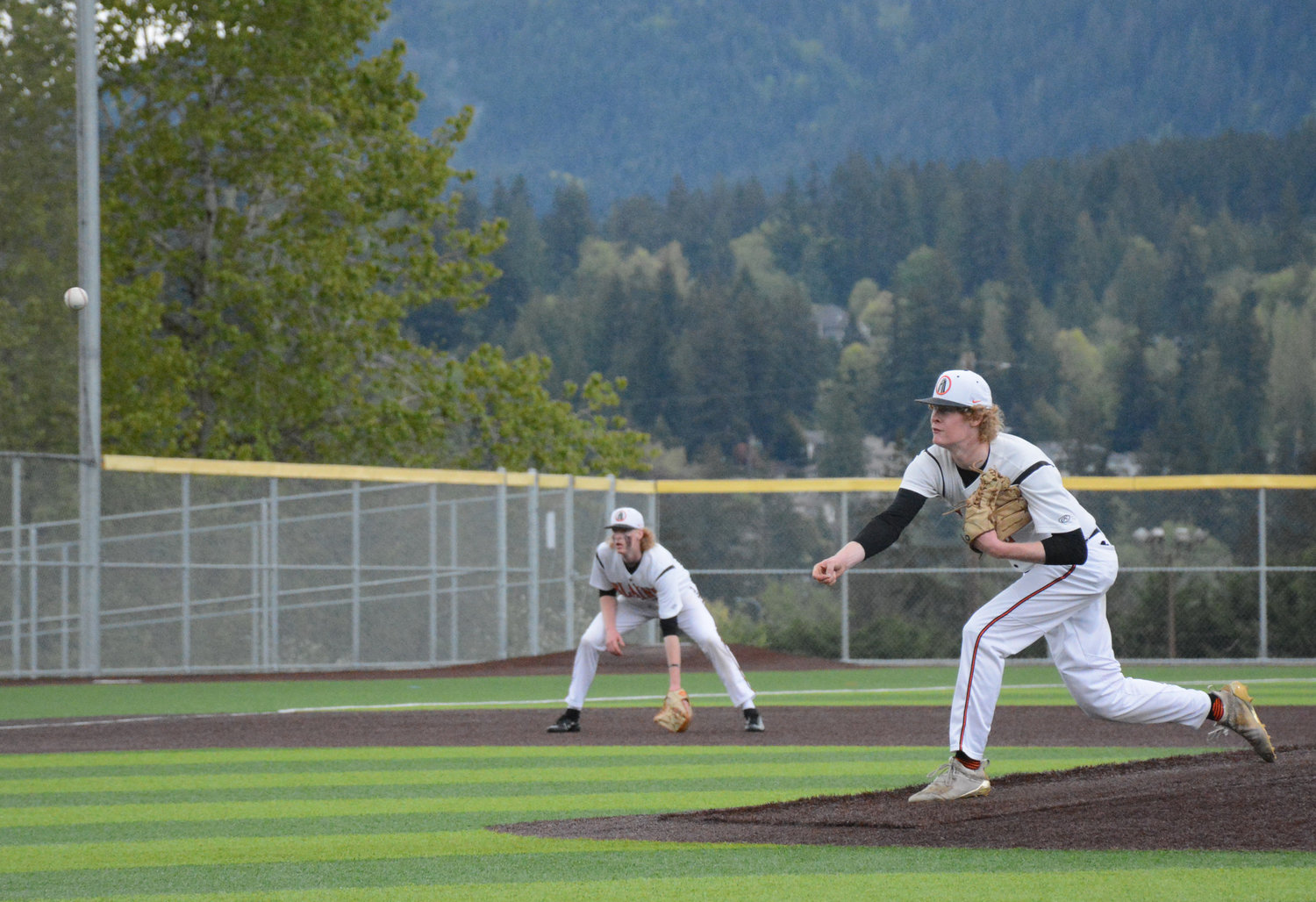 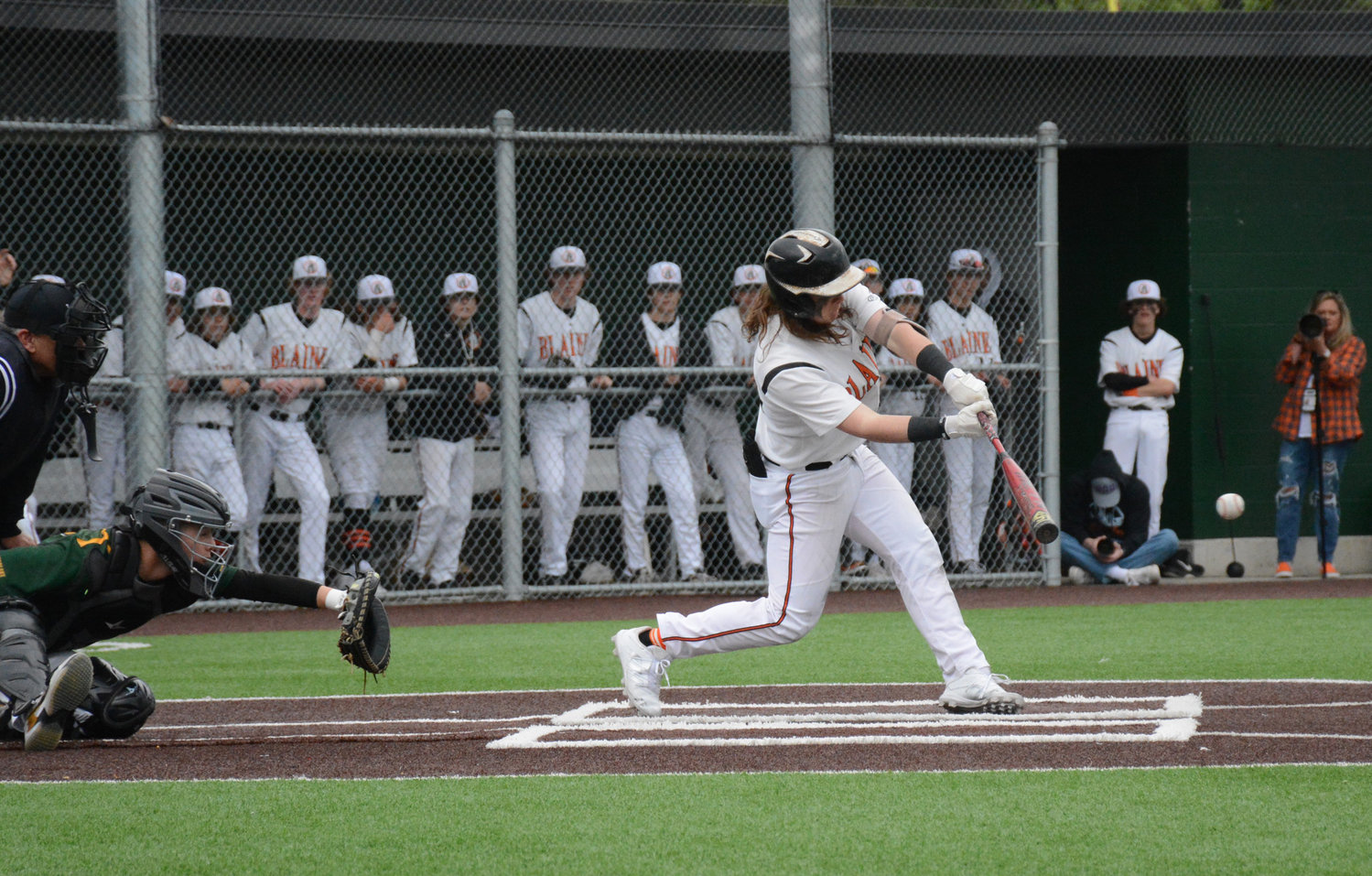 Axel Puls at bat in the Borderites’ final game of the season May 14 at Sehome High School.
Photo by Ian Haupt
Previous Next
Posted Wednesday, May 18, 2022 3:22 pm
By Ian Haupt

The Borderites’ late push to close a five-point deficit and extend their season into regionals fell short May 14 at Sehome High School.

No. 5 Blaine lost 6-4 to No. 6 Overlake-Bear Creek in the second round of the 1A district 1/2 consolation bracket. The win advanced Overlake into the third and fourth place game against Meridian later in the day and a spot at regionals, while Blaine’s season ended.

“I thought we came up one big hit or play short,” said head coach Tanner Olson, after his team closed the gap to two points in the last three innings.

The Overlake Owls opened the scoring in the first inning and the Borderites responded, with an RBI double from junior Axel Puls. With runners on second and third, they looked close to scoring again before the inning was up, but Overlake’s sophomore pitcher saw it out.

Both teams traded stops in the second and third innings.

“His slider’s good,” said an Owl batter of senior, Borderite pitcher Aiden Vezzetti, on his way into the dugout after grounding out at first. Senior catcher Daniel Michaud helped Blaine’s defense, throwing a runner out at second.

Then the owls found hits. They scored twice in the fourth inning with a single, big triple and another single. Runners on first and second with no outs, Aiden Vezzetti closed out the top of the inning with help from Jaxon Kortlever snagging a line drive through the infield. The Borderites didn’t respond, and the Owls pushed in three more runs in the fifth.

Senior Anden Holley had relieved Aiden Vezzetti on the mound with two runners on base and conceded a big triple. Then another runner made it home after Kortlever couldn’t hold onto a lob over the infield.

With the top of the batting order coming up, the Borderites needed to score to keep the Owls in reach. Kortlever stole his way to third after being walked and tagged up when sophomore Hunter Vezzetti popped out. At two outs, senior Aiden Holley, twin-brother of Anden Holley, cracked a big RBI triple to deep right-center field. Overlake then replaced their pitcher, seeing danger mounting. The junior reliever struck out senior Brady Castellano, keeping a three-point lead heading into the sixth.

Blaine was back at bat after a pop out, strike out, double and play made by Kortlever at first. Anden Holley hit a single, Aiden Vezzetti a double and senior Seth Zuch pushed Anden Holley home through an error. In prime scoring position, the Borderites couldn’t bring their runners into draw level. But they found a quick three outs in the top of the seventh with a double play and had one last chance.

Calling on their defense to “clean it up,” the Overlake fans looked nervous. Puls stepped up first and sent a grounder down the third base line. He was thrown out at first. Aiden Holley was walked and Castellano picked up a single. Then Aiden Holley was thrown out at third. And with two outs, Aiden Vezzetti cracked one straight at the relieving pitcher who snagged it out of the air, ending the game and sending his team to regionals.

Olson, who said earlier in the season the team had a goal of going to state, said there wasn’t one sole turning point in the game but that the team dug itself too big of a hole to get out.

“I’m proud of this group of seniors,” Olson said. “We didn’t have the success we wanted but we laid a good foundation for the future.”