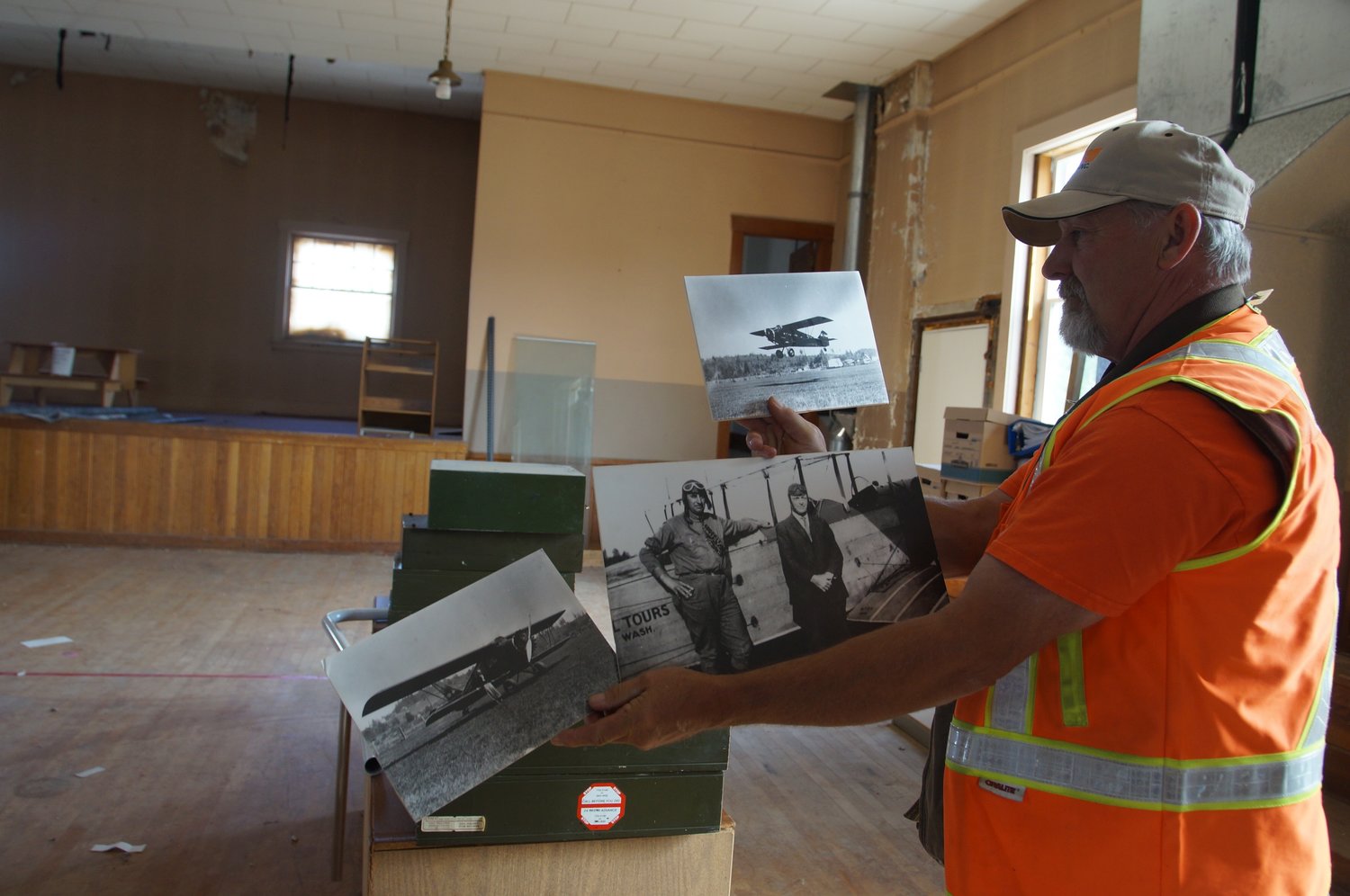 A city public works employee looks at old photos left in the second floor of old city hall in June 2021. The building will start being demolished on Monday, August 8. The 95-year-old building has housed many city services, including a library and fire station.
Photo by Grace McCarthy 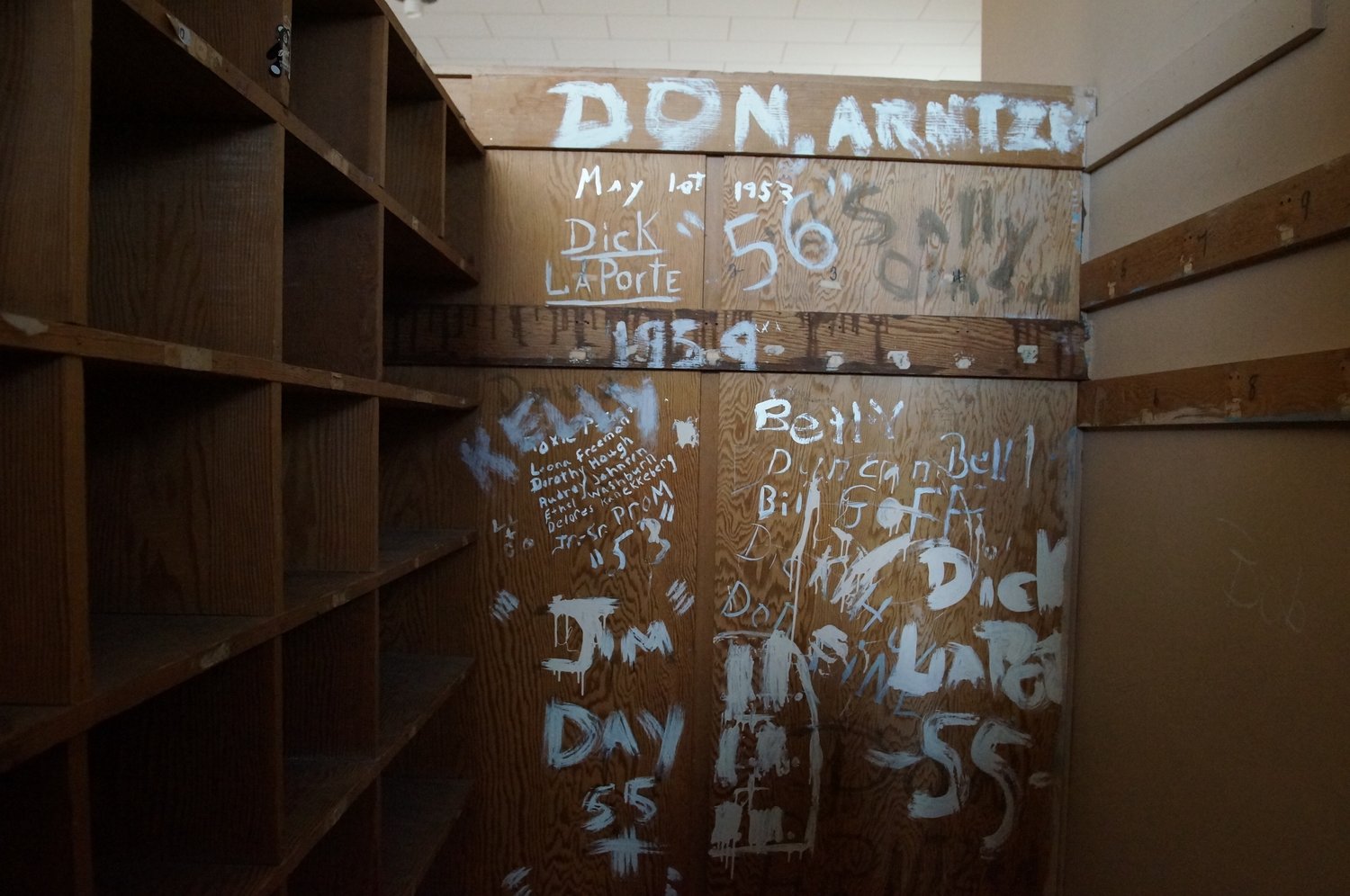 Blaine High School students from the ‘50s scribbled their names into the dance hall in the upstairs of the old city hall building.
Photo by Grace McCarthy
Previous Next
Posted Wednesday, August 3, 2022 3:25 pm
By Grace McCarthy

Nearly a century of history will come down as the city of Blaine’s public works department is prepared to start demolishing the old city hall.

The 1927 building at 344 H Street will be demolished during the day Monday, August 8 through Wednesday, August 10. Public works scheduled asbestos abatement during the first week of August and is planning for seven days of post-demolition clean up.

The demolition will not create road closures, said Gary McSpadden, the city’s interim public works director. Only pedestrian traffic will be detoured from in front of old city hall to the south side of H Street while a chain link fence is up. The fence will be pushed back and reopen foot traffic once hazards are cleared. McSpadden estimates public works should be completely finished with clearing the property by mid-August.

McSpadden said people can get the best view of the 95-year-old building coming down from the south side of H Street.

City council is still determining what it wants to do with the city-owned property after several years of discussion. Council has considered expanding the neighboring police station or adding affordable housing units to the site. Council voted in June to have city staff prepare a preliminary report on the cost to develop a bigger police station, which should determine whether they decide to use the old city hall property for the police department.

The old city hall stood as a mostly derelict building since the city officially closed it in 2012. The building was originally constructed as a World War I memorial, according to a 2012 Drayton Archaeological Research report on the building. It didn’t qualify for the National Register of Historic Places because of its additions and alterations, according to the report.

The building housed the old Blaine Fire Department station and a conglomerate of city services including a small Blaine library, jail, and light and water departments. It’s been used for graduation ceremonies, an American Legion hall and Blaine High School dances.

The second-floor ballroom had alumni names from the ’50s scribbled on a wall. Dick LaPorte, Jim Day, Leona Freeman, Ethel Washburn, Sally Olason, Audrey Johnson, Don Arntzen and Bill Goff were a few of the names that remained into the 21st century.

Public works crews found remnants of the city’s history, including a 1988 proclamation from the city of White Rock’s mayor dedicating January 2 as a day of respect in honor of the Northern American Free Trade Agreement being signed. Photos of the city’s “Vigil” sculpture being made and an old Blaine Visitor Center sign were also in the building.

“We really wanted to clean the façade. It would have been hell of a neat thing in downtown,” Baldwin said. “Demolition was really a last result.”

Baldwin said he sees the property serving as a parking lot while the city prioritizes its tight budget for infrastructure fixes. He said the city is in a hard position as the building needs to come down before health and safety hazards worsen, but he doesn’t see the city as having the financial resources to immediately do something with the building.

Arlington-based Skycorp LTD is demolishing the building for about $295,000.