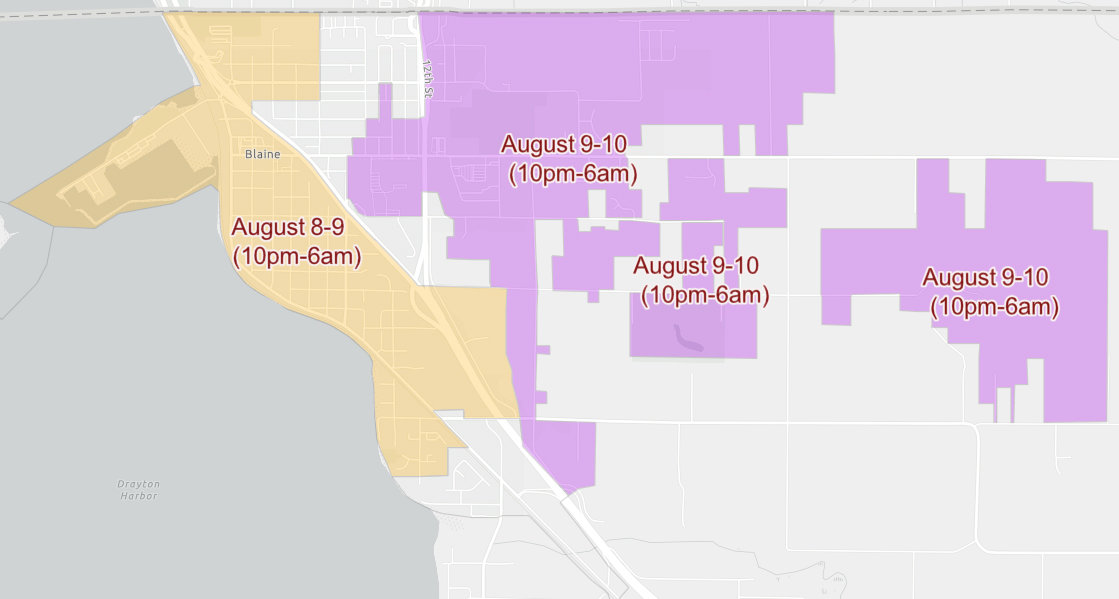 The city of Blaine’s Public Works Department scheduled two overnight power outages from 10 p.m. to 6 a.m. for the nights of Monday, August 8 and Tuesday, August 9. Many Blaine residents will be impacted for one night that is determined by their location within the city. Semiahmoo is not affected.

The power outage is being done so public works crews can install new switches and electrical cables to improve the city’s electrical grid, according to the city’s website. The outage will only impact Blaine power customers, and not Puget Sound Energy customers.

Gary McSpadden, the city’s acting public works director, said public works determined outage times that would have the least impact on residences and businesses. The city’s website will be updated as crews work with projected times power will return. The public works department will man the phones both nights and crews will be prepared to take care of water and sewer issues.

“We have a pretty good plan in place and have crews to take care of any issues that arise,” McSpadden said.

Most of the city west of I-5, from 0 Avenue to Dodd Avenue, including Marine Drive, will be impacted August 8. A section west of 6th Street and north of E Street to 0 Avenue will be included in the August 8 outage.

On August 9, sections of east Blaine and areas east of I-5 will lose power. A large section will lose power from SR-543 to around North Harvey Road and H Street Road. Power will also be out in areas along Odell Road, Cost Cutter Plaza, Blaine school district’s main campus and Pipeline Athletic Complex. Power customers between H Street and Sweet Road, west of Flambeau Road and east of Harvey Road, will lose power August 9.

The clusters losing power are fragmented. The city has published an outage map on its website for Blaine residents to determine whether they will be impacted. View the map at bit.ly/3zDKGB8.

Blaine Police Department recommended on its Facebook page that residents should reach out to people they know who may not be aware of the power outage or rely on electricity for medical devices.