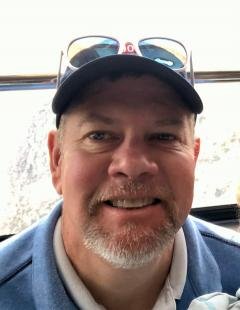 Bradley Vern Smith was born September 28,1966 in Valley City, ND, where he was raised by loving parents Vern and Lucille Smith. In 1995 he met his wife Dana Meyer while working at Fort Lewis, WA. They married in 1997 and shortly afterwards moved to Kansas City where they both attended chiropractic college. Having discovered a love for the Pacific Northwest, they returned to Washington State and together set up their practice, Brad and Dana Chiropractic in Bellingham in 2002. Brad had a sharp wit and many were on the receiving end of his many smiles, great jokes, and pranks.

The births of son Lucas and daughter Brie were joyous moments and Brad was extraordinarily proud of the fine adults they are becoming. He boasted of their achievements – athletic and otherwise – to anyone and everyone. Brad and Dana created a family that always included dogs. He was enthusiastic about all sports (especially the Minnesota Vikings), traveling with his family, golfing, hunting, hiking, and anything on the water. Brad loved firing up his homemade, outdoor pizza oven at the drop of a hat to celebrate life with friends.

He was a member of North Bay Christ the King and active in the Bellingham Connections Networking Group where he met great friends, patients and business associates.

Brad was diagnosed with pancreatic cancer in 2021. He passed away Tuesday, September 20, 2022 at home. The family is grateful for the support of so many who loved Brad.

Brad is survived by his wife Dana Meyer Smith, his children Lucas and Brie, his parents, Vern and Lucille Smith, his sister Jovinae, and nieces Heather and Christina.

A memorial service is planned to celebrate Brad’s life. It will be held on June 3, 2023 in Whatcom County. Additional information will be shared as the date approaches. If you wish to honor Brad’s legacy, donations can be made to Whatcom Humane Society (whatcomhumane.org).