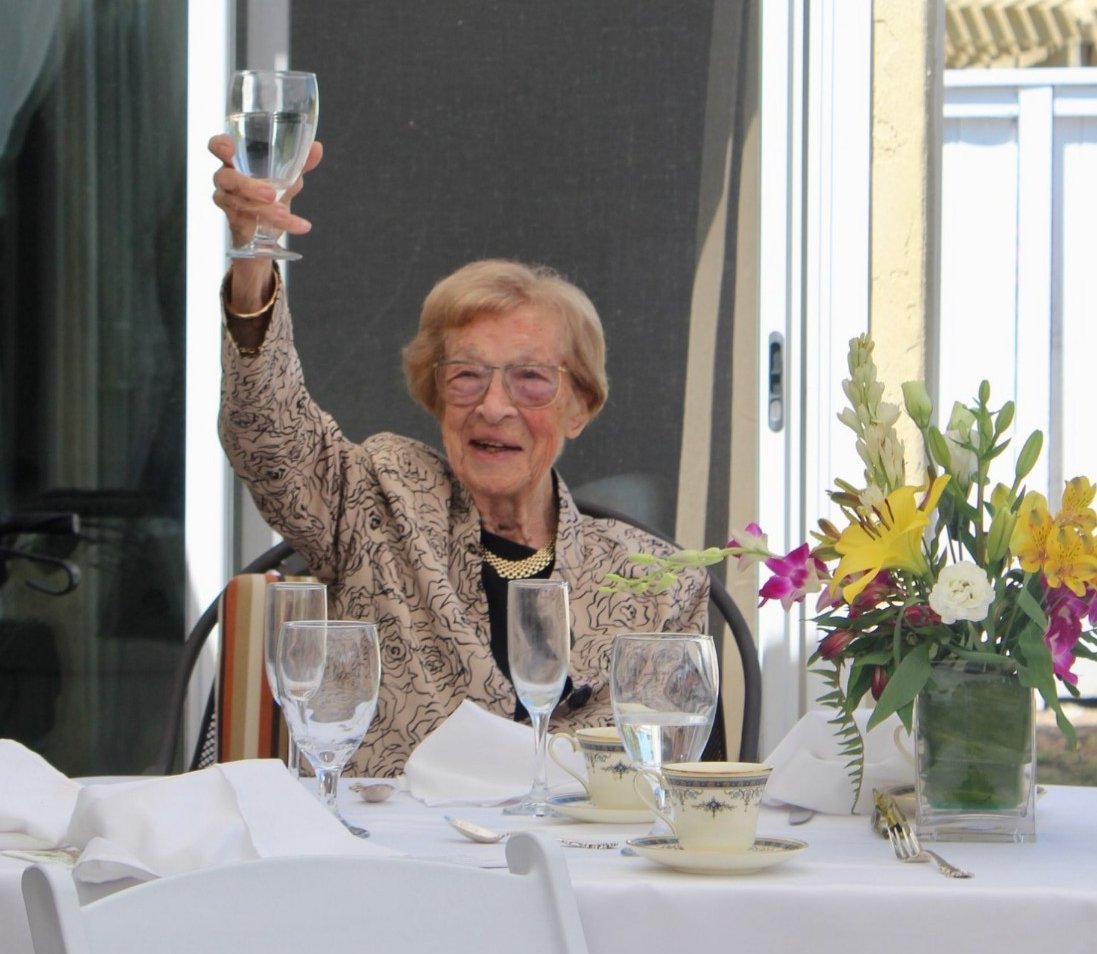 Irma P. Rooney passed away suddenly, but peacefully in her sleep on April 21, 2022 at Nazareth House in San Diego, CA – her final resting place since moving there in 2012.

She was born in Blaine on January 20, 1924 to Italian immigrant parents Giovanni & Veronica Piovesan. After graduating as valedictorian from Blaine High School, she went on to earn her college degree in foreign languages from Washington State University, class of 1945.

In 1946, she married husband Philip J. Rooney, a career Naval officer from Seattle, and went on to raise five children together, all during numerous deployments and housing relocations around the globe, including  Japan, Europe, and the Hawaiian Islands.

After settling down in San Diego, CA in the 1960s, she continued her career as a high school teacher for the next 25 years before retiring in the 1980s. She also remained active as a valued contributor to numerous organizations and charities, including Foreign Language Club, La Jolla Women’s Club, Mercy Hospital Auxiliary, Pen Women, Phi Beta Kappa, Regina Coeli, WSU Alumni Association, San Diego Opera, and Father Joe’s Villages.

Irma had the unique ability to make everyone she spoke to feel like they were the only and most important person in the room. With seven languages in her back pocket, conversations were her masterpiece, and personal connections meant everything to her.

She gave the best hugs and would say every goodbye as if it was her last. We will miss seeing her in the rear-view mirror, waving “fare thee well!” She was the most beautiful storyteller and could recite distant memories as if they were just yesterday, right up through her final days with us.

Her motto in life: “Not as important to do great things in life, but rather to do the small things with great love.” ~ Mother Teresa of Calcutta. The other motto she would say at the end of phone conversations was “Enjoy the day, Treasure the moment, Be at peace.” Short and simple, but most powerful. An inspiration and role model for others to see the world and live life to the fullest. To be a strong woman in the workforce, and always advocate for others.

She is survived by her children Patrick (Janie Henberger) of Blaine, Peter of Blaine, Margaret (Murray Scheinman) of Chicago, IL, and John (Anna-Marie Hintgen) of San Diego, CA, along with her eight grandchildren and seven great-grandchildren.

Cheers to the most intelligent, educated, beautiful, faithful, vivacious, and caring woman we’ve ever known. Rest in Peace, Irma!

A Catholic Mass will be held at St. Anne’s Church in Blaine, on Saturday, May 14, followed by a burial service next to her beloved husband Philip (1918-2005), son Thomas (1950-1975), parents, grandfather, and siblings Primo and Aldo Piovesan. A separate San Diego service and celebration of life is being planned, and will be announced in the coming weeks.