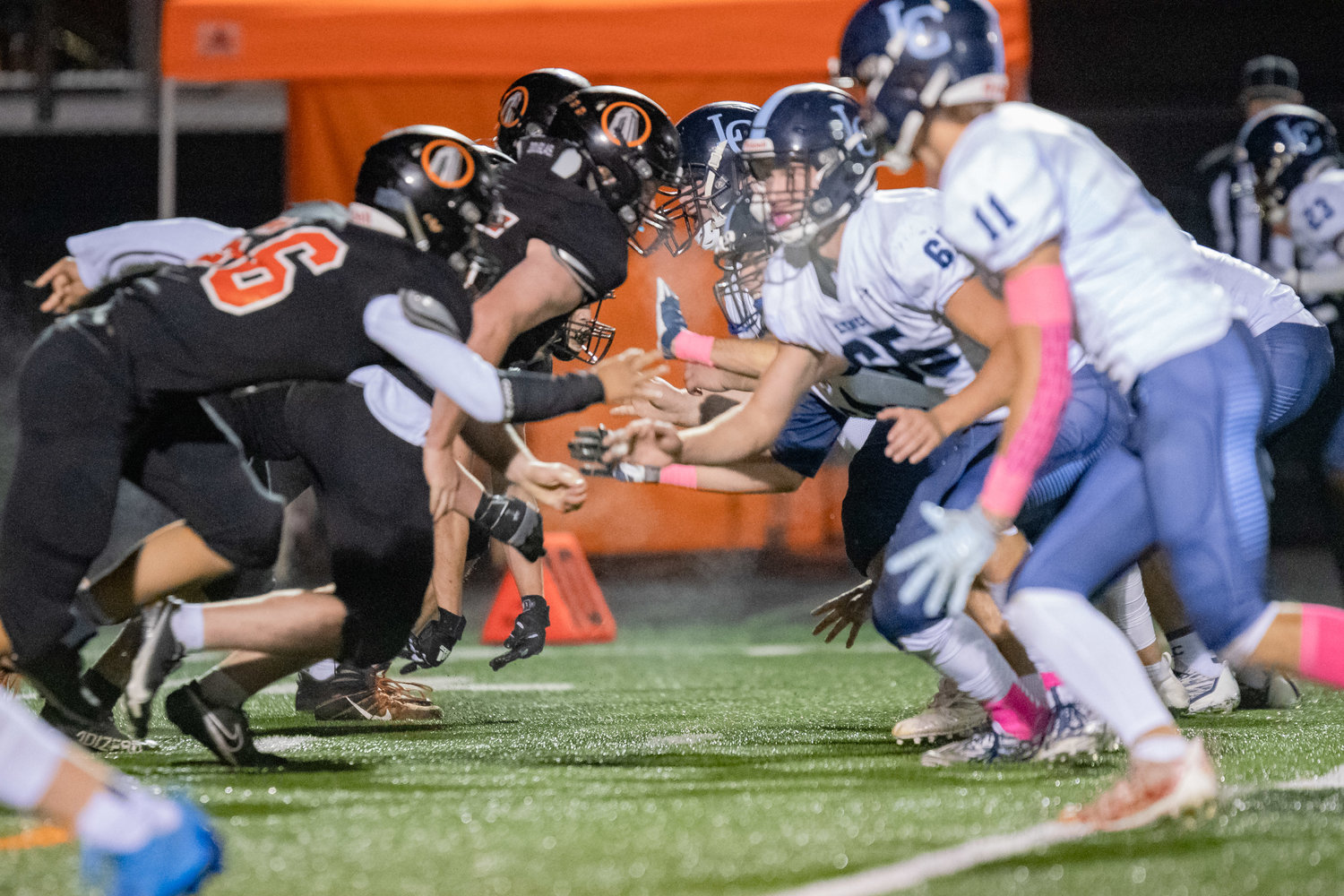 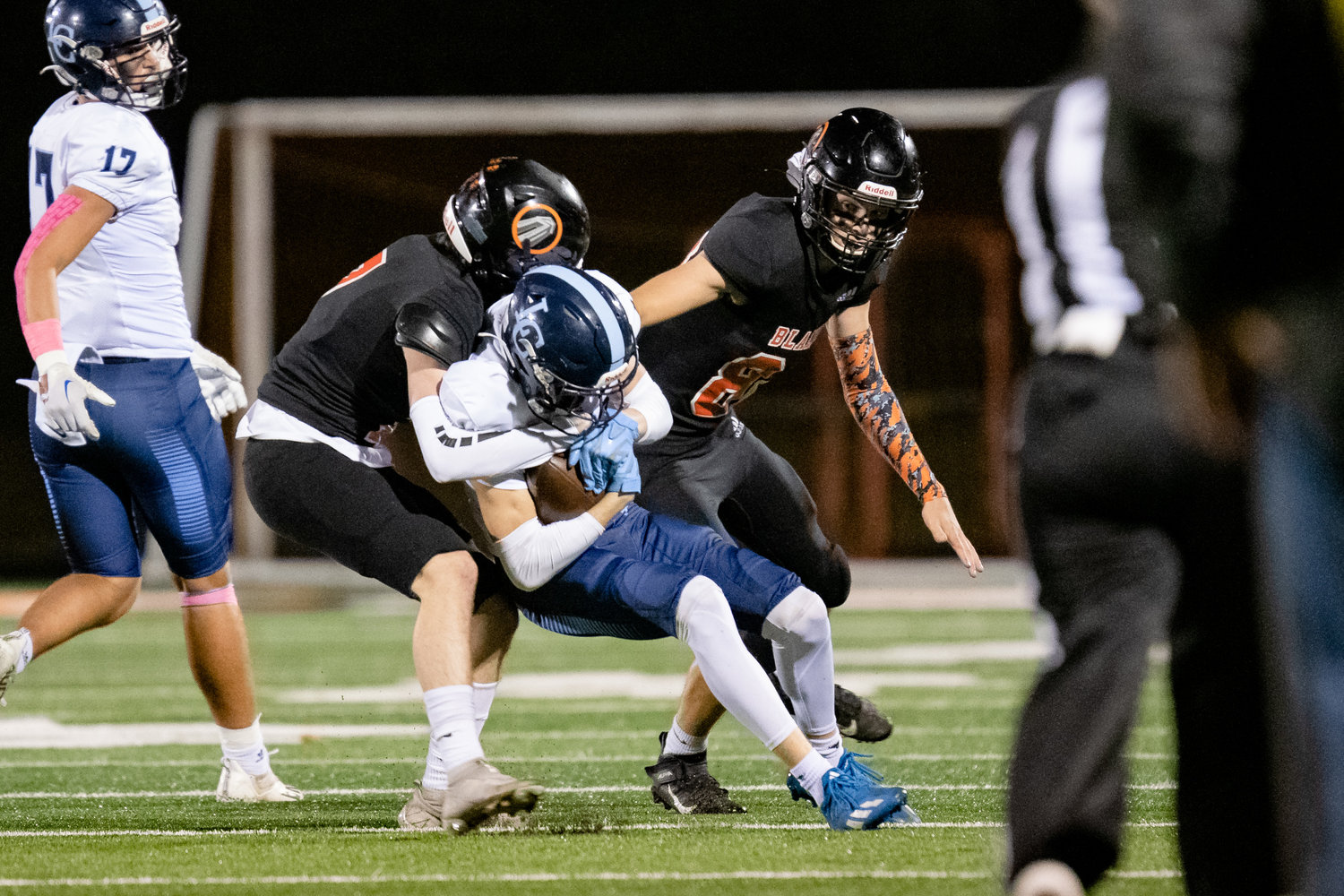 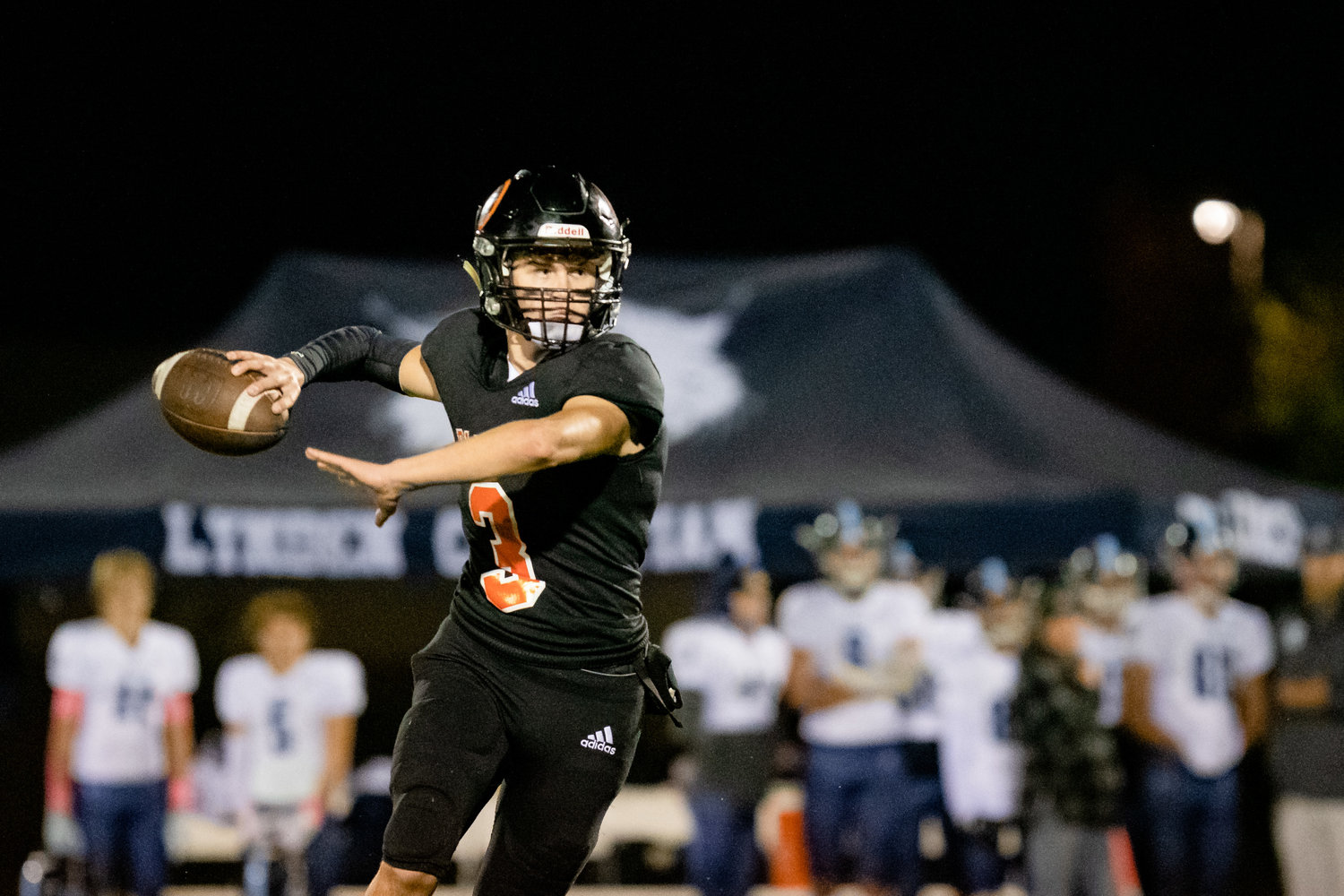 Sophomore quarterback Colin Davis helped put Blaine on the board, connecting twice with his receivers for touchdown passes in the second half.
Photo by Janell Kortlever
Previous Next
Posted Wednesday, October 26, 2022 4:50 pm
By Ian Haupt

Blaine fall sports will finish up their regular season action this week as some teams start postseason games.

The Borderites lost 61-13 to an unbeaten Lynden Christian team at home October 21 after grabbing their first win of the season on the road the week before.

The Lyncs came out flying and were no match for the Blaine defense, taking a 48-0 lead into halftime. Blaine scored twice in the second half after sophomore Colin Davis found junior Riley Ihde for a 55-yard pass and junior Conner Dalry for a 25-yarder. Blaine picked up its first win of the season October 14 on the road against Bellingham High School. The Borderites beat the Bayhawks 44-18 in Bellingham’s homecoming game at Civic Field.

Blaine has two more games this season. The team travels to Nooksack Valley Friday, October 28 and hosts Cedar Park Christian on Friday, November 4. Both games are at 7 p.m. The Borderites have a 1-7 overall record this season. They are 0-3 in conference.

Blaine girls soccer grabbed two wins on the bounce of a 9-1 defeat to Lynden Christian October 17. The Lady Borderites beat Nooksack Valley in a commanding 5-0 win at home and then traveled to Mount Baker to take a 1-0 win into the postseason after the game was called early due to lightning.

They finished the regular season with a 6-6-1 record. They were 5-2-1 in conference.

The Lady Borderites lost 3-1 to Burlington-Edison at home for senior night October 26 after getting their second win of the season at Mount Baker the week before. Blaine beat the Mountaineers 3-2 on October 25.

The girls got off to a slow start on senior night, losing the first set to the Tigers 25-17. They bounced back to take the second set 25-20, but lost momentum in the third and were unable to come back. Seniors Anika Hagen, Gillian Rea and Hope Weeda all contributed big points as well as juniors Teyana Zaddack and Deja Dube and sophomore Kaitlyn Harrington. Seniors on the team include Rea, Weeda, Alyssa Bacon and Hagen.

The girls will finish their regular season at Mount Vernon High School Thursday, October 27 at 7 p.m. They are 2-12 this season.

Blaine will run in the 1A district meet held at the Deming Log Show Grounds Saturday, October 29 starting at 10 a.m.

Blaine’s co-op team with Ferndale will compete next in the Northwest Conference B Championships at Arne Hanna Aquatic Center in Bellingham on Friday, October 28. The meet starts at 3:30 p.m. The team’s schedule can be found at bit.ly/3U5exL8.