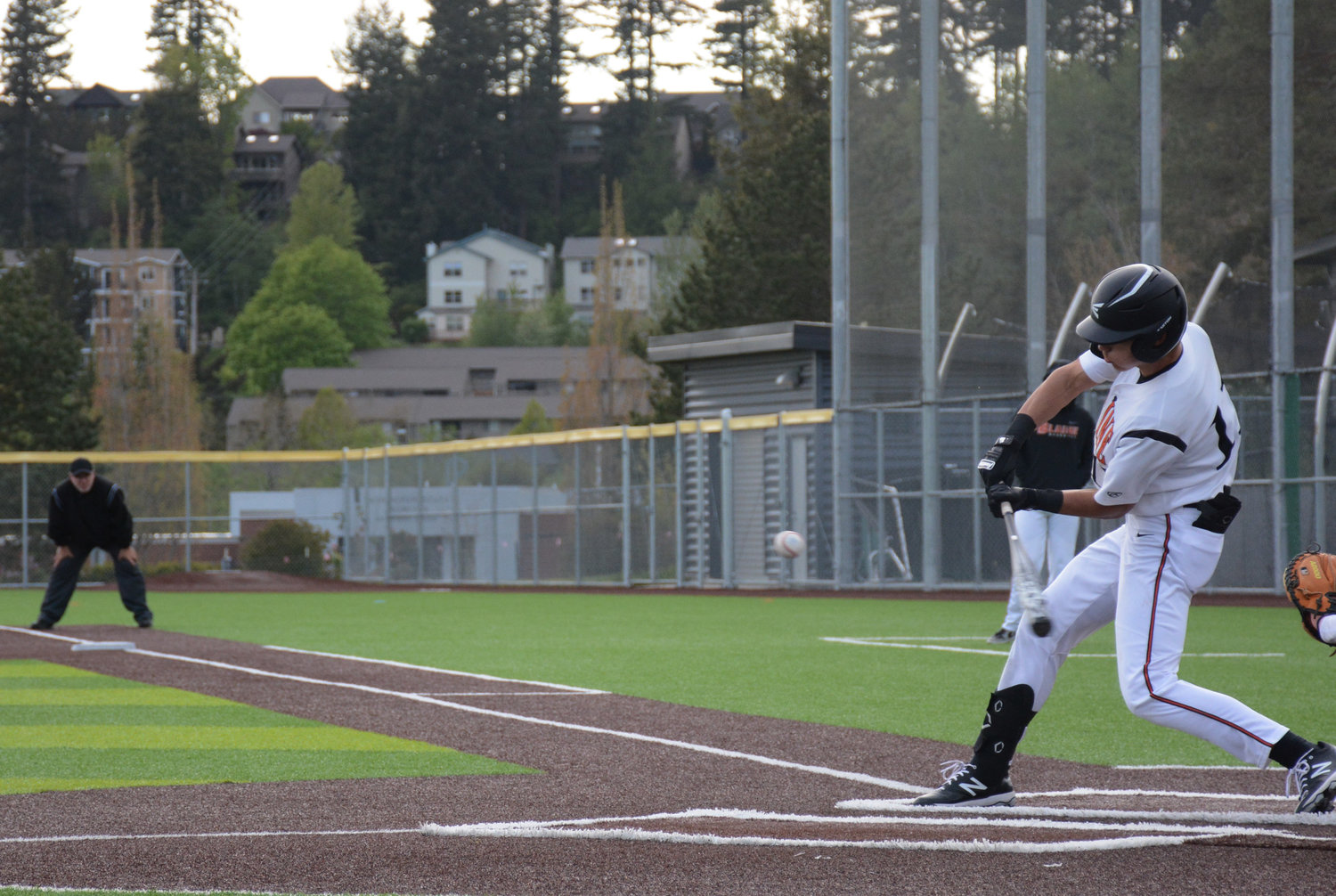 Hunter Vezzetti at bat for the Borderites in their 13-3 win over Lynden Christian in the district 1/2 1A tournament May 7 at Sehome High School. Vezzetti had two RBI doubles.
Photo by Ian Haupt
Posted Wednesday, May 11, 2022 4:29 pm
By Ian Haupt

A line drive down the first base line from lead-off hitter Jaxon Kortlever set the momentum for the Borderites to extend their playoff run in their second game of the day, momentum they didn’t have in their first game.

After a 6-0 loss to University Prep May 7 at Sehome High School, Blaine’s varsity baseball team, the No. 5 seed entering the 1A District 1/2 tournament, rallied from the first pitch to beat No. 1 Lynden Christian 13-3. The win granted the Borderites another game in the consolation round against No. 6 Overlake at 1 p.m. Saturday, May 14 at Sehome. The winner of that game will advance to the third/fourth place district game at 3:30 p.m. at Sehome.

The Borderites’ playoffs run started slow. With a strong pitching performance, University Prep held the boys scoreless, dampening the mood in the dugout. But Blaine showed up for the second game ready to go.

“The guys knew that game was a fluke so they turned up with a chip on their shoulder,” head coach Tanner Olson said.

Olson said in a tournament like that there’s no time to feel sorry for yourself. He said the team had a goal all season of making it to state and to do so there can’t be any waver in determination.

The boys had the bases loaded 30 seconds into the game, which Olson said made a huge difference. The energy in the dugout was electric, celebrating each run that came in as a team. By the bottom of the first inning, the Borderites were up 4-0.

Facing Blaine’s Aiden Vezzetti on the mound, the Lyncs came up empty in the first. And the Borderites kept rallying. With RBI’s (run batted in) from Brady Castellano, Axel Puls, Aiden Holley and Hunter Vezzetti, Blaine had a 12-0 lead going into the bottom of the fifth. Lynden Christian needed to score three just to keep the game going, which they did.

Another RBI double in the top of the sixth from Hunter and stop by older cousin Aiden saw the game out early at 13-3.

Olson said the team has hopes to make it out of the district. They will face Overlake, who they split games with in a doubleheader in regular season, to get to the third and fourth place game. Both teams in that game secured qualification to regionals.

“We’re feeling pretty confident with Aiden Vezzetti and Anden Holley on the mound that we can get through this weekend,” Olson said. “Those have been our guys all year.”

This article has been updated to correct Hunter and Aiden Vezzetti's relationship. We regret the error.