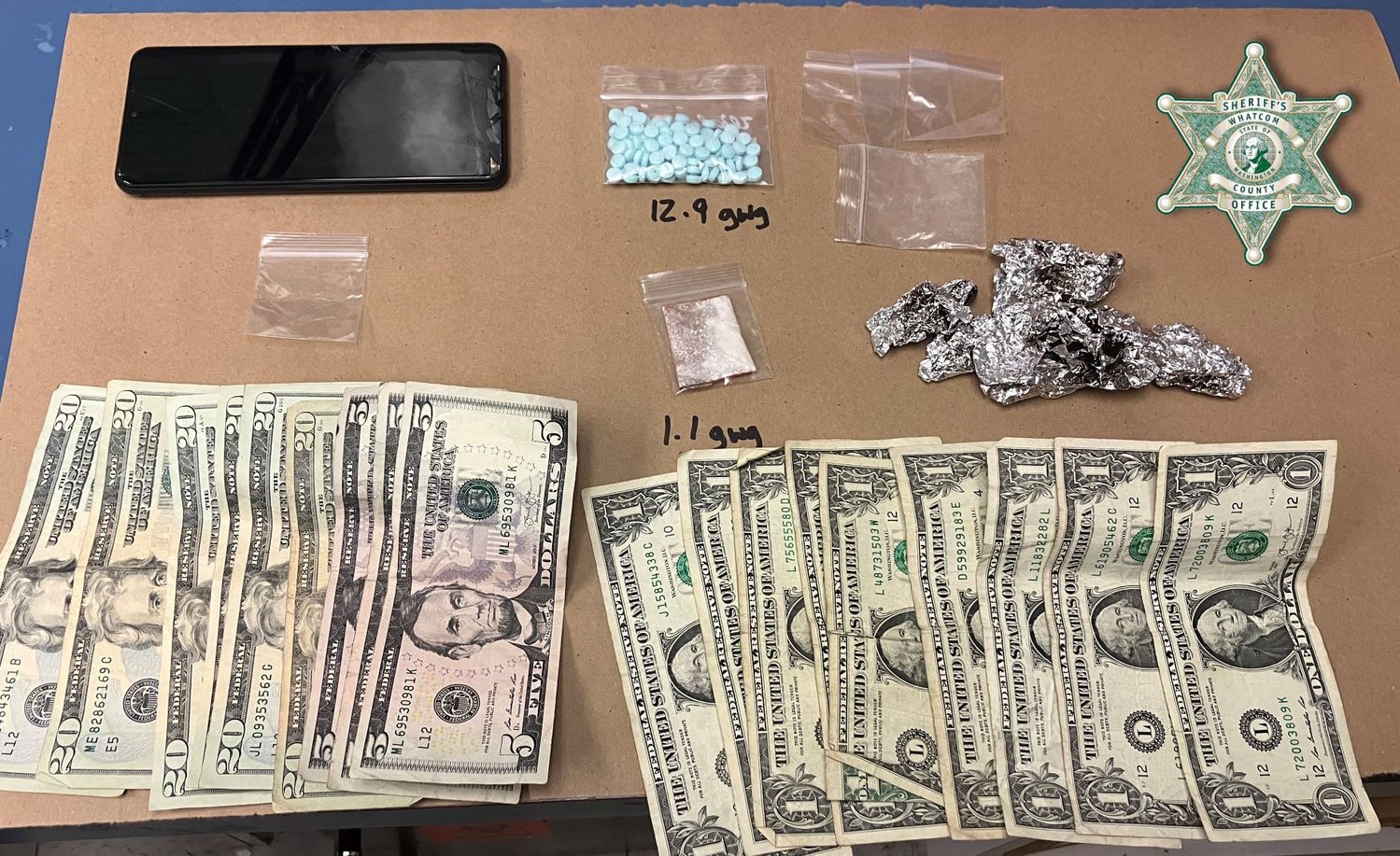 Tanner Allen Larson, 31, was arrested August 3 for the death of Aeschli Wilkinson, 30, in May 2021. Larson's backpack contained cash, a zip lock bag with an unidentified powder, burnt foil with narcotic residue and a bag with about 100 blue M-30 pills, which weighed 12.9 gross weight grams, at the time of his arrest.
Courtesy Whatcom County Sheriff's Office
Posted Thursday, August 11, 2022 4:48 pm
By Ian Haupt

Whatcom County Sheriff’s Office (WCSO) deputies arrested a Blaine man August 3 who, after a long investigation, was found responsible for a Blaine woman’s death in May 2021. The woman reportedly overdosed, and fentanyl was found in her system.

On May 7, 2021, Blaine Police Department (BPD) officers responded to the death of Aeschli Wilkinson, 30, in the 700 block of E Street, WCSO spokesperson Deb Slater wrote in an August 4 news release. When the medical examiner’s toxicology report found fentanyl in Wilkinson’s system, BPD requested WCSO to assist in the investigation of a possible controlled substance homicide death.

The investigation found Wilkinson had been in contact with Larson about obtaining painkillers. Slater wrote, according to the messages, Larson sold Wilkinson pills on multiple occasions between April 28 and May 6. Wilkinson was found dead around 8:30 a.m. May 7.

Probable cause was developed to charge Larson with controlled substance homicide, Slater wrote. WCSO criminal interdiction deputies, with Whatcom Gang and Drug Task Force assisting, located Larson August 3 in the 4300 block of Meridian Street in Bellingham. His backpack contained cash, a zip lock bag with an unidentified powder, burnt foil with narcotic residue and a bag with about 100 blue M-30 pills, which weighed 12.9 gross weight grams. He was arrested without incident.

“Fentanyl in its clandestine form is a deadly drug,” said Whatcom County Sheriff Bill Elfo in the release. “The sheriff’s office will continue to prioritize the investigation of deaths resulting from the street sale of this drug as homicides.

“Potential users of this drug should be aware of its lethal nature and those that deal in the drug should know that if a death results, they will be charged with homicide,” Elfo continued. "I’m very proud of the efforts of our detectives in building this and all recent fentanyl investigations.”

This article, originally published on August 5, has been updated to include information that appeared in the August 11 print issue of The Northern Light.