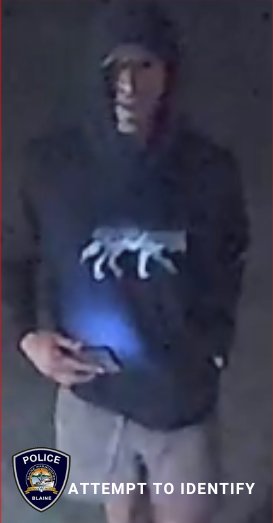 Blaine Police Department (BPD) is asking any residents who recognize the individual in the photo to call 911.

On its social media, BPD released a photo of an individual in a hoodie with the hood up and a four-legged animal on the front. The individual also appears to be holding a phone and wearing a baseball cap under their hood in the low-quality image.

BPD says callers should let the dispatcher know it is not an emergency and that they would like to speak with an officer. An officer will call back to record the information.