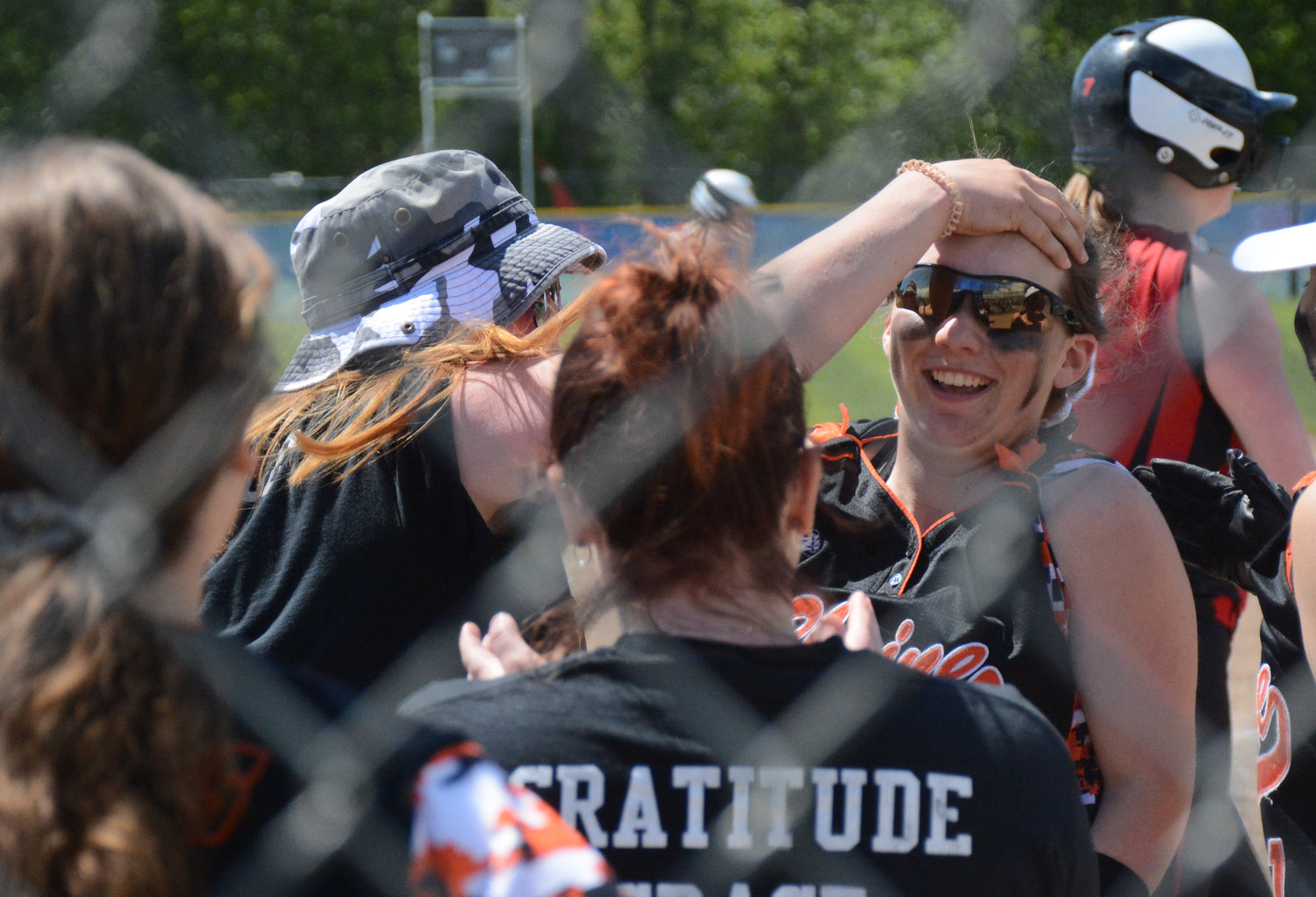 Assistant coach Riley Miller, l., celebrates with pitcher Piper Nissen after Nissen made two big plays to keep Mount Baker from scoring in the second inning on May 21.
Photo by Ian Haupt 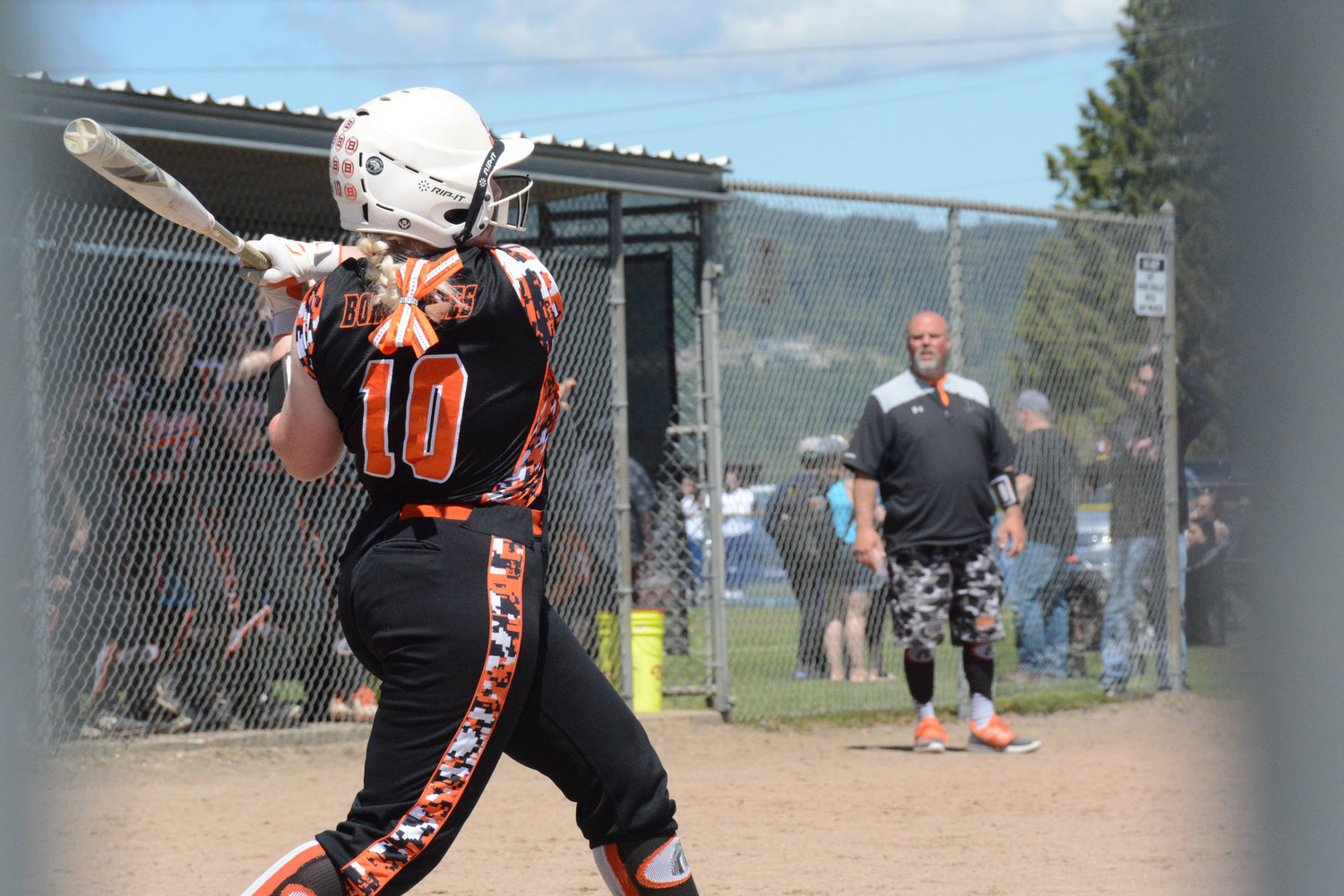 Lauryn King follows through as head coach Sean Miller watches from third base in Blaine’s 10-0 win over Cedar Park Christian May 21.
Photo by Ian Haupt
Previous Next
Posted Wednesday, May 25, 2022 4:43 pm
By Ian Haupt

Down by three in the seventh inning with two outs and bases loaded, the Lady Borderites were at the bottom of their batting order. Up against Mount Baker, who they lost 17-3 to in the regular season, and needing a win to extend their season, the pressure was mounting.

Senior Angela Gutierrez stepped up and hit a two-run RBI single, bringing the score to 6-7. Junior Piper Nissen found a single through an error to load the bases again. Then sophomore Jordyn Vezzetti cracked a line drive directly to the Mountaineers’ second baseman, who caught it, ending Blaine’s season and state berth hopes.

“I’m not disappointed,” head coach Sean Miller said. “Sad that we’re not going to get to play again, but proud the team stepped up to the competition.”

Blaine lost 7-6 to Mount Baker in its second game of the day May 21 at Janicki Fields in Sedro-Woolley. The loss knocked the team out of the 1A district 1/2 consolation round.

The Lady Borderites’ tournament started with Granite Falls May 20, which they beat 7-1. They then lost to Nooksack Valley 12-1 in the semifinal later that day. The girls ended up being the only team to score against Nooksack in the tournament. The loss put them up against Bothell’s Cedar Park Christian in the second round of the loser-out consolation bracket.

Blaine notched an eight-run rally in the third inning, with RBI doubles from junior Makenna Wright and freshman Shaylie Daniels and a forced error. Another RBI from Wright in the fourth and sophomore Emersyn Bakker tagging up after sophomore Alia Ball popped out and the ladies were up by 10. The game ended early in the fifth after the Cedar Park Christian Eagles failed to respond.

The Lady Borderites were then set to face Mount Baker. If they won, they would play in the consolation final. The winner of which would go on to state.

After losing by 14 runs during the regular season, Miller said his team was disappointed. They believed they could play with the Mountaineers.

The game started slow and defensive. Both teams made big plays to keep each other locked at zero.

With two Borderites on base in the second inning, Mount Baker threw out a runner at home plate. In the same inning, with runners on second and third, pitcher Nissen faked a throw to first to get a runner at third. She then closed out the inning picking up a grounder and making the play at first. And the Lady Borderites carried the momentum into the third.

Nissen hit a single and junior Lauryn King pushed her home with a big RBI double. Then Bakker cracked one over the fence.

But Mount Baker slowly pulled the runs back, scoring in the third, fourth and fifth innings to tie it up.

Blaine went ahead again in the sixth as Vezzetti’s grounder down the third baseline pushed in Ball. The Mountaineers responded with two-run RBIs, putting them in the driver’s seat heading into the final inning.

Gutierrez’s RBI made it tight, but Mount Baker was able to see the game out.

Blaine will only be losing three senior players this year. Gutierrez being one of them, Miller said that was a nice at bat for her to leave the team on. He also said the team is in a good place for next season.

“We were knocking on the door,” he said. “And next year I think we’ll kick the door down.”