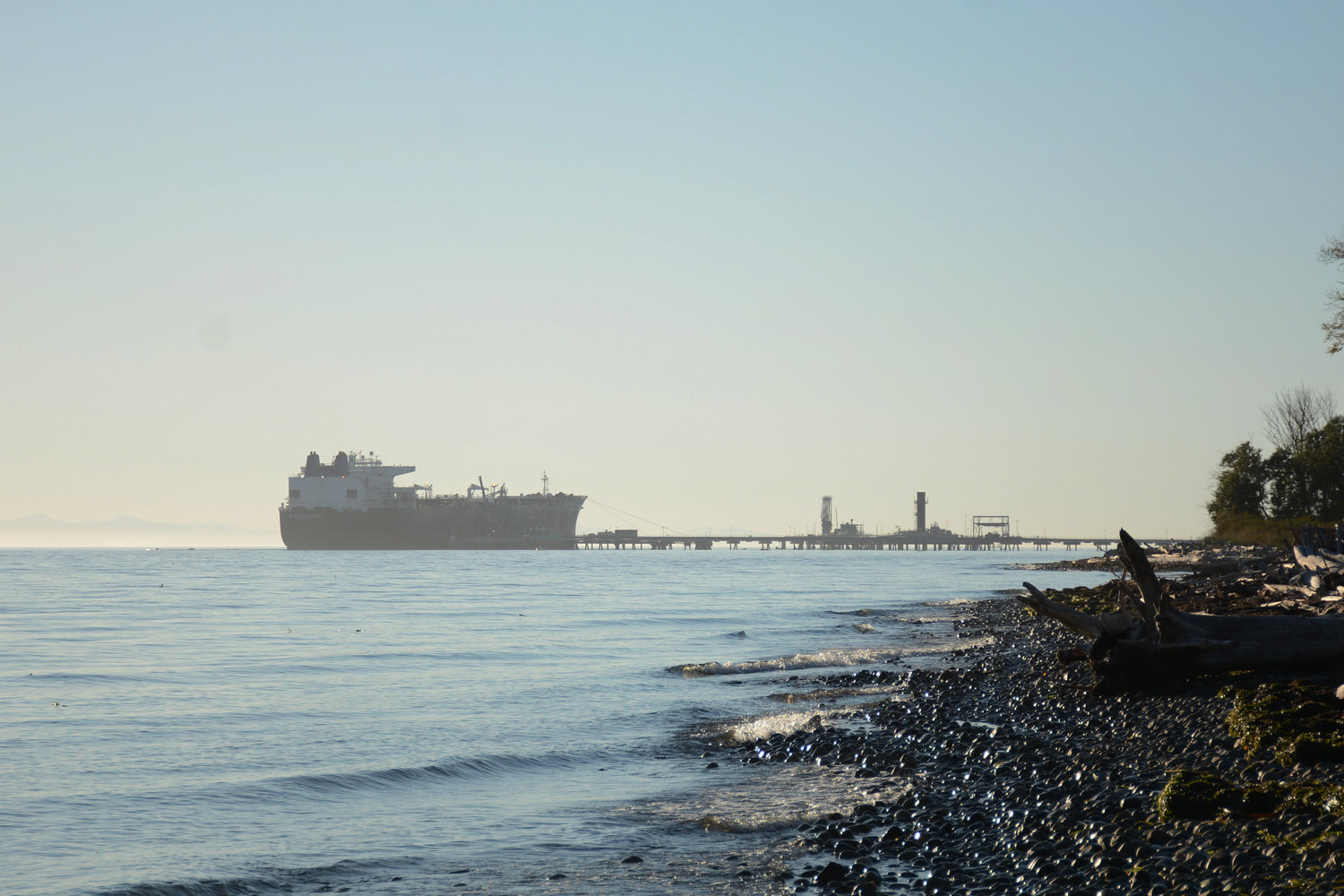 A vessel moored at the south wing of BP’s Cherry Point dock as seen from the beach along Gulf Road on September 20.
Photo by Ian Haupt
Posted Wednesday, September 21, 2022 3:57 pm
By Ian Haupt

The U.S. Army Corps of Engineers released an environmental impact statement (EIS) August 12 that details the impact of operating the north wing of the BP Cherry Point shipping terminal and is awaiting consultations with local tribes before it decides whether the wing will be used as previously permitted.

In 1996, the U.S. Army Corps of Engineers approved a permit to add a north wing to the already operational south wing of the dock, originally built for ARCO in 1971. BP purchased ARCO in 2000, and construction on the north wing finished in 2001. But several environmental groups sued the Corps and BP, asking for an EIS.

Acting as environmental group Ocean Advocates, the groups appealed when the U.S. District Court for the Western District of Washington ruled in favor of the Corps. The Ninth Circuit Court of Appeals then ordered the Corps to conduct an EIS.

The study, which began over 15 years ago, compared the environmental risk of using the south wing dock at maximum capacity to operating out of both the north and south wing docks. Environmental groups expect shipping traffic to increase if the north wing is deemed usable, which is why they filed suit.

The amendment prohibits federal agencies from granting permits that could “result in any increase in the volume of crude oil capable of being handled at any such facility, other than oil to be refined for consumption in the State of Washington.” The benchmark for oil volume was set October 18, 1977.

With the release of the final EIS, the Corps will hold discussions with the Department of Justice and other third parties. EIS project manager Daniel Krenz said an anticipated decision date was set for November 12, but will likely be delayed as the Corps still has to consult local tribes.

A Lummi Nation representative declined to comment on the decision, but said the tribe is in communication with the Corps.

“The record of the decision will document what we are going to do with that permit,” Krenz said.

The Corps is taking public comment on the EIS, which can be sent to Krenz at Daniel.A.Krenz @usace.army.mil.

In a joint press release, environmental organizations Friends of the San Juans, Evergreen Islands and Friends of the Earth said their greatest concern is that the Corps has yet to restrict the number of crude oil tankers allowed to use BP’s Cherry Point terminal. An environmental representative could not be reached for comment.

According to the EIS, the number of tanker transits increased by 226, or 27 percent, from 2000 to 2007, post construction of the north wing.

Based on the most recent EIS data, BP’s tanker traffic declined from 2014 to 2017 with the expansion of its pipeline and rail infrastructure, but the environmental groups argue the growth in refinery and berthing capacity enables BP to increase traffic for profit.

BP Cherry Point employs more than 890 people, according to its website. Last year, it celebrated its 50th anniversary.

The EIS is available on the U.S. Environmental Protection Agency’s website and at several local libraries, including the Blaine, Ferndale and Bellingham libraries.