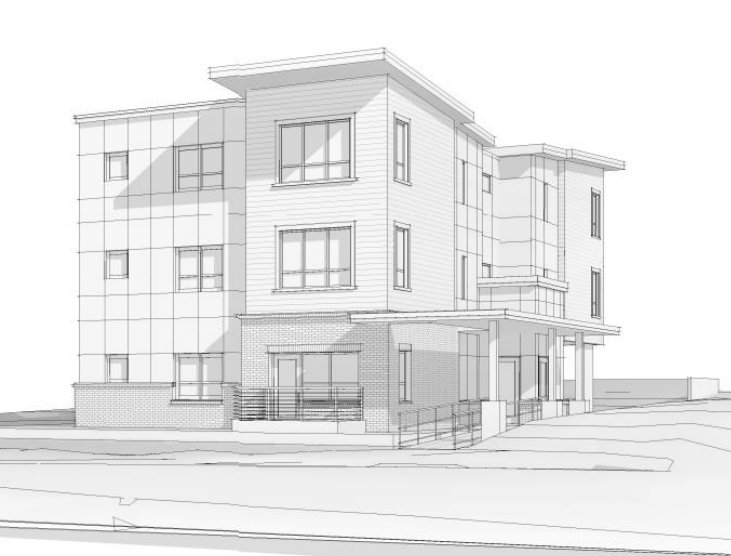 A proposed five-unit residential project in the 900 block of Peace Portal Drive, near Clark Street. The project is being postponed because of high project costs and return on investment concerns.
Image courtesy city of Blaine
Posted Wednesday, August 17, 2022 4:18 pm
By Grace McCarthy

Blaine City Council unanimously approved a planning document for making amendments to the central business district zoning during its August 8 meeting. The project will consider changing downtown height and parking regulations, which are expected to help prospective developers along Peace Portal Drive.

The central business district covers most of the downtown core, excluding the wharf area. The downtown district zoning was last updated in 2018 after seven years of public participation and city planning for design requirements.

Current residential parking standards in the city’s zoning code are forcing developers to reduce the number of units in proposed projects, making it difficult to achieve a return on investment, said Stacie Pratschner, community development services department director, during the meeting. The 30-foot maximum rear building setbacks on the southern end of downtown is limiting the number of required parking spaces.

The shoreline master program, which regulates Washington shorelines, will also need to be updated because of height requirement discrepancies from the zoning code. Properties adjacent to Peace Portal Drive, located within 200 feet of the ordinary height waterline, are subject to both the zoning code and shoreline master plan regulations, Pratschner said. “We propose to fix that and harmonize the requirements,” she said.

Council also approved creating an ad-hoc advisory committee for the project that includes one planning commissioner, one councilmember and five community members. Committee meetings are slated to meet bi-monthly starting in late August to discuss proposed policy changes, advise planning commission on proposed code amendments and make recommendations to the city, according to a city memo from Pratschner.

Community development services expects to have the State Environmental Policy Act (SEPA) review complete by the beginning of 2023, a public hearing by summer 2023 and then have council adopt the zoning and shoreline master program amendments by June 2023, according to the project timeline. It’s unclear when the state department of ecology, which has final approval on the shoreline master program, would finish reviewing and approving the shoreline program’s changes.

Public participation opportunities for the downtown zoning amendments will include informal meetings, outreach to community organizations, an email list and an open house will be held before the public hearing. Postcards will be mailed to all property owners in the downtown district and the city’s website will have a webpage with project updates, according to the city memo.

Council approved the project’s charter 5-0, with councilmembers Richard May and Kerena Higgins absent.