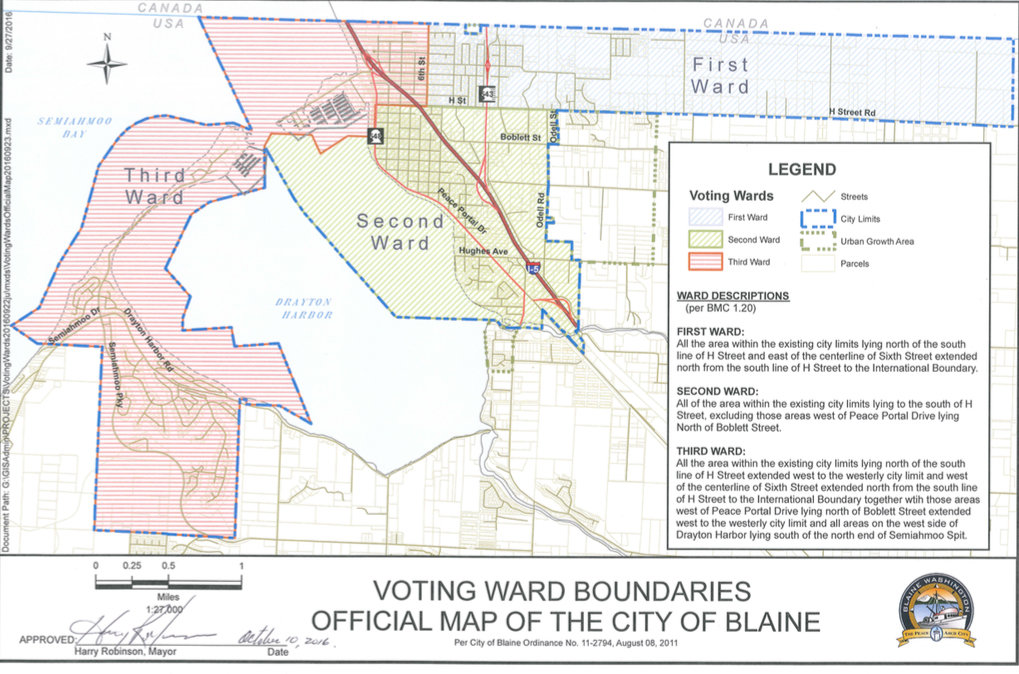 The city of Blaine is beginning to evaluate whether or not it will need to shift its voting ward boundaries to accommodate population changes in the 2020 U.S. Census.

During its September 12 meeting, Blaine City Council unanimously authorized interim city manager Dave Wilbrecht to enter into an agreement not to exceed $21,000 with a consulting firm to manage the redistricting process. The money will likely come from the city’s remaining federal Covid-19 stimulus funds, according to a city memo, which totaled around $900,000 in August. After the meeting, the city hired Redmond-based Sammamish Data Systems Inc., the same company that Blaine school district hired last fall for redistricting review, deputy city clerk Naomi Soulard said.

The city hired an outside firm because it lacked the staffing capacity and redistricting experience to evaluate the ward boundaries on its own, according to the city memo. The city initially considered Flo Analytics for the redistricting process, but went with Sammamish Data Systems because the company offered less expensive services and the school district had a good experience with them, Soulard said.

Blaine is divided into three voting wards: The first ward runs west of 6th Street to the city limits and between the U.S./Canada border and H Street; the second ward encompasses the downtown core west of Odell Road and runs south near the Bell Road intersection; and the third ward has Semiahmoo, a section west of Peace Portal Drive downtown, and Blaine Harbor to 6th Street.

The city has two city councilmembers for each ward and one at-large councilmember for the entire city. Councilmembers Richard May and Kerena Higgins represent the east Blaine area, Garth Baldwin and Rhyan Lopez represent central Blaine, mayor Mary Lou Steward and Eric Davidson represent Semiahmoo and Mike Hill sits in the at-large position.

Sammamish Data Systems will present several boundary maps at an upcoming city council meeting and will present the most popular one or two maps at a subsequent public hearing. The first meeting could be as soon as Monday, September 26 and the public hearing is scheduled for October, Soulard said. If needed, a second public hearing could be scheduled near the end of October. City council is expected to vote on the final boundary map in mid-November.  Sammamish Data Systems and the city’s attorneys will follow state law to ensure political bias does not influence the redistricting process, according to the city memo.