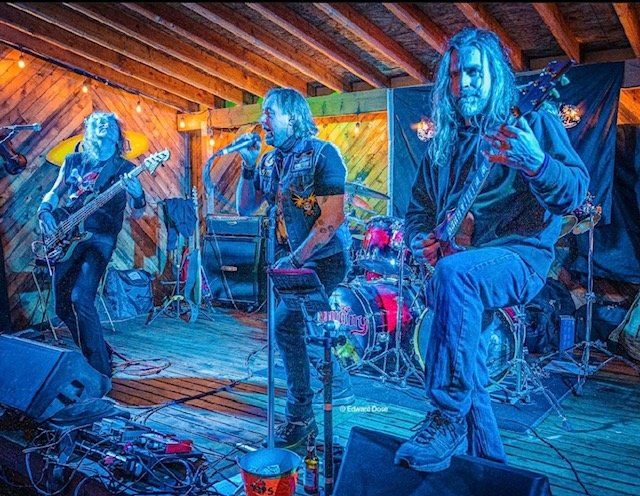 The four band members of Mutiny Bay, a heavy metal band out of Bellingham, never miss a chance to joke around in that easy way people who have been together forever do; interesting since they’ve been together for just under a year.

The universe was in the right place when they found each other. Vocalists and guitarists Eric Haven and Andy Beech have been together the longest. Haven moved to Whatcom County from California and started hearing Beech in clubs. “I glommed onto him and just knew I had to play with that maniac,” he said. They got together in 2008.

Then they discovered drummer Tanner Scinocco who comes by his talent by birth – his mother sang and his dad played guitar in Death By Radio, making his choice inevitable. He knew from about age seven that drums were his thing.

Next they needed a lead vocalist. Through a Craigslist ad, they connected with Bob McCormack and texted him to audition. He agreed, under one condition: They needed to wait until the Seahawks game was over. That, alone, would have cemented it as Seahawks fans themselves. Luckily, McCormack also had the talent – he played with Child Saint for a long time and does interesting things with his vocal range. “Yeah, I was in choir as a kid until I got too cool for that,” he said. The irony isn’t lost since he’s way cool for the high notes now. He migrated from New York by way of Los Angeles.

Here I should say I had zero knowledge about heavy metal. I went to hear them because my kitchen painter mentioned he really liked their sound and Beech made 30 guitars for Prince. That was a story right there.

I went to The Beach in Birch Bay one Saturday to hear them. It was loud but a terrific Beech guitar riff went on long enough to bring the audience to cheers, loving every decibel-filled moment.

I asked them about music versus noise and why they gravitated to heavy metal. Partly it’s their generation. Haven told me he heard Kiss for the first time when he was 12 years old and knew he wanted to learn “how to do that.” It’s the energy of the sound, ability to connect with an audience and take people out of their heads to forget about the world. “We play,” he said, to entertain. “Let’s get together and share a moment.” Art does that – it’s the piercing connection from the stage directly to the audience that makes magic happen.

They play covers and write their music. Beech says 90 percent of their own music starts with a guitar riff he throws out and then everybody helps with the arrangement. Scinocco – whose drumming they described as having precision, power and something animal about it – keeps it on track. “Tanner makes smooth changes from one thing to another,” McCormack said. “You don’t often see that. He makes it so you don’t even notice; it’s a whole.”

They are four parts of a whole and exchange the lead on stage and off. There are no egos. The democracy within the group seems to stem from commitment to each other and, especially, their audience. They are comfortable as musicians and don’t need to be self-centered.

“We play what we like,” McCormack said. “And the audience likes that. We change our sets, too, and transition the music, because we don’t want our audience to be bored.”

Oh, and about those guitars Beech makes – they are gorgeous works of art. He’s been a luthier since 1980. Growing up in Maple Falls was too far to travel to Bellingham for strings so he started making his own guitars. Now he and his artist daughter team up. He made 30 for Prince – and many for other musicians. His work can be found at dhaitreguitars.com.

It’s not just noise to me anymore; it’s part of musical culture, a form of art. Haven summed it up … it’s “melt your face off music” and it’s irresistible.

Holly Redell-Witte reviewed a different kind of art for NYC newspapers and magazines for many years. She writes and lives in Whatcom County, currently doing readings from a book she is writing about people, places and times in her past.