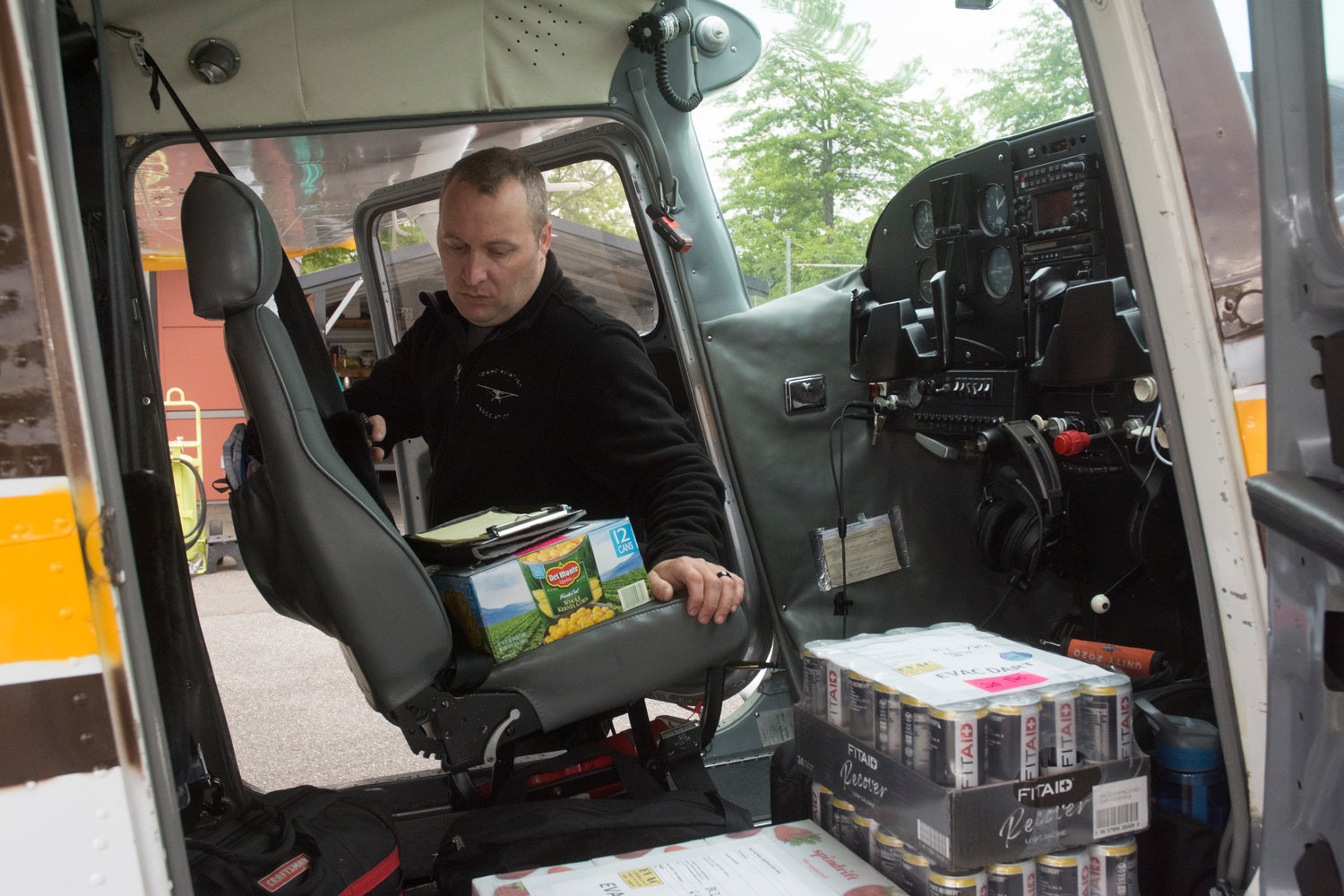 Pilot Bryan Painter of Auburn loads his Cessna 205 with over a half-ton of food bound for Grays Harbor during the Thunder Run on June 18.
Photo by Jack Kintner 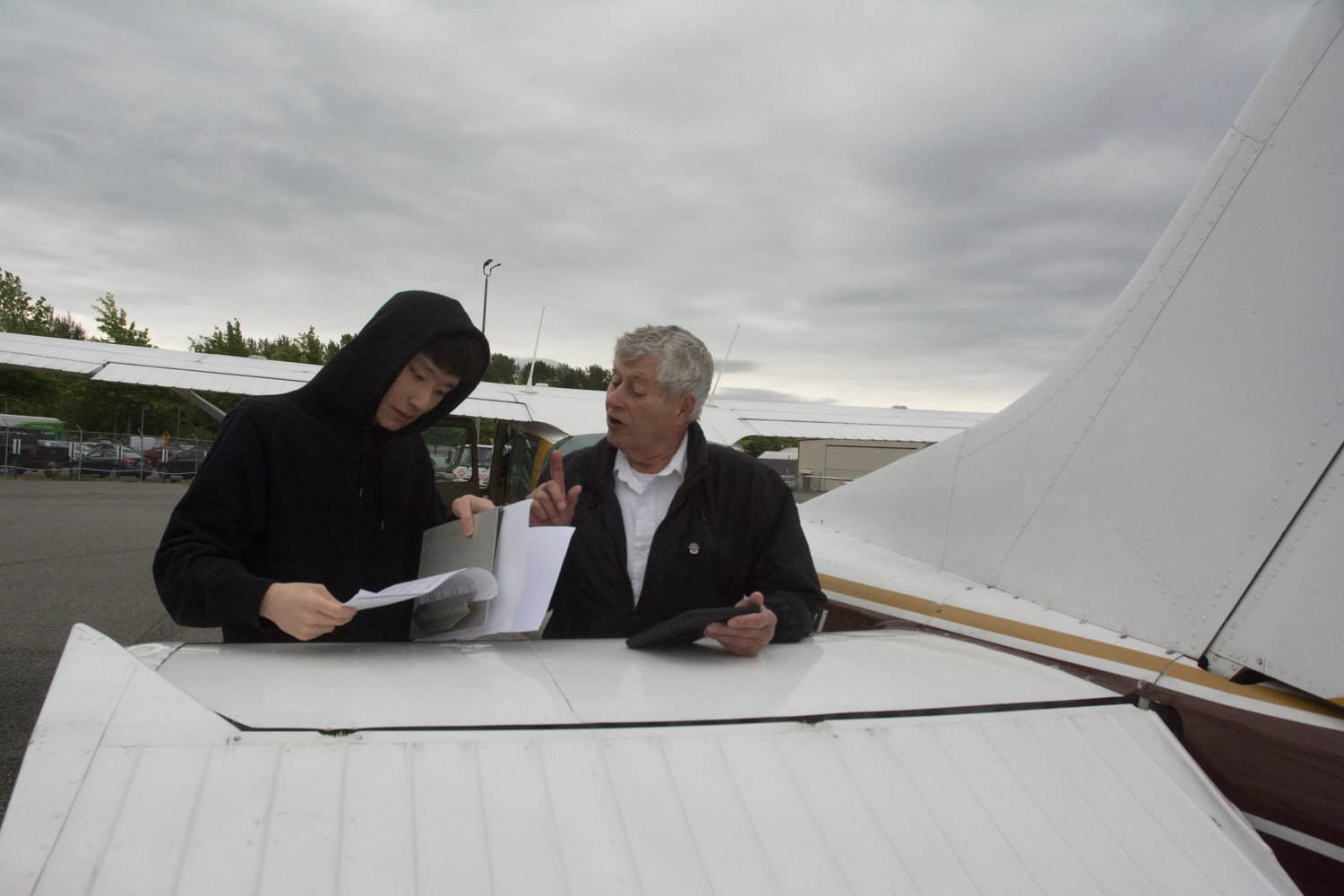 From l.; Pilots Matthews Mak and Jim Higginson go over their flight plan before loading their aircraft with food.
Photo by Jack Kintner 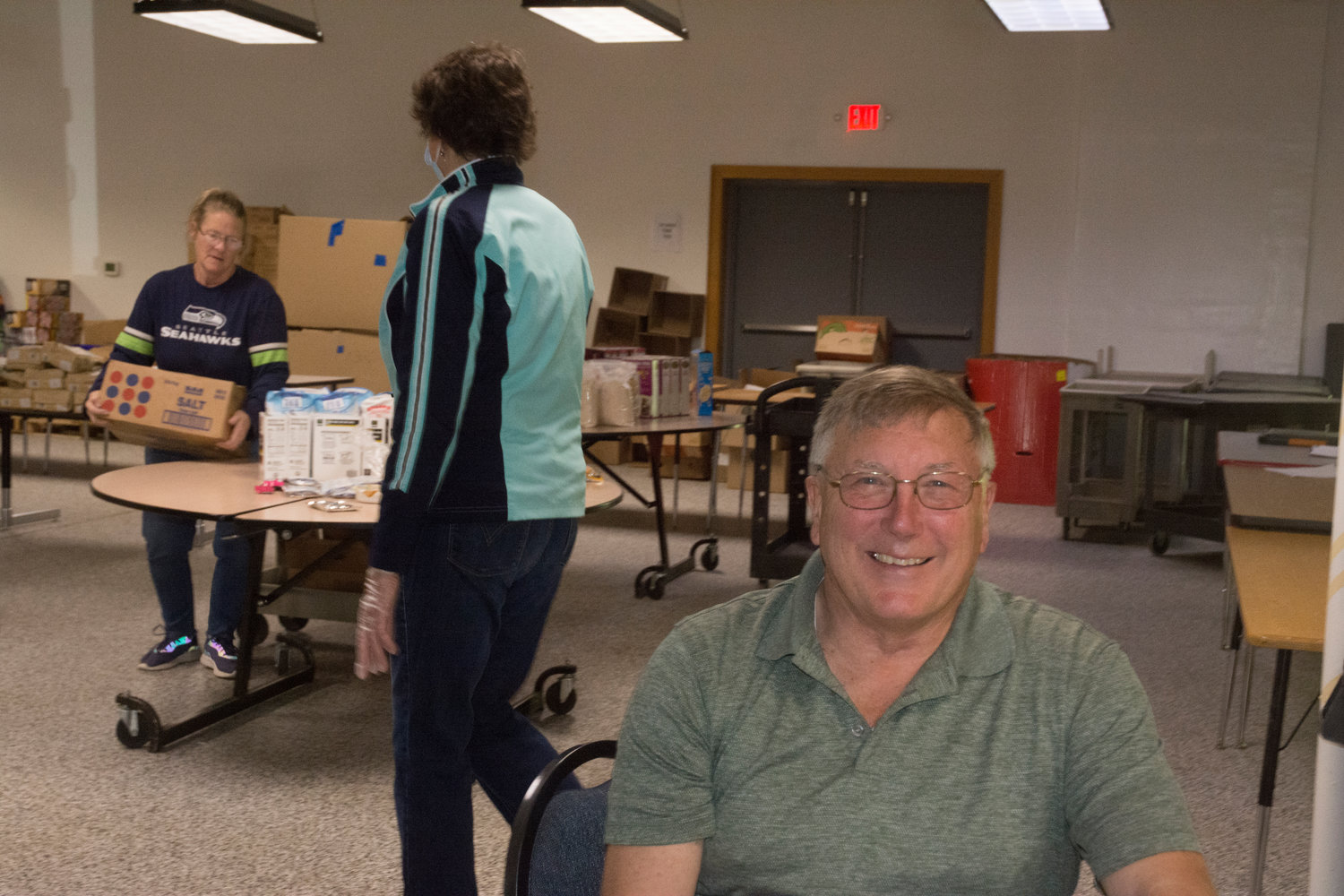 Miracle Food Network (MFN), a nonprofit food distribution agency in Ferndale, has seen its work increase significantly since the start of the pandemic. To readily meet demands after a major disaster, it joined forces with the Emergency Volunteer Air Corps (EVAC) during the Thunder Run emergency preparedness drill that flew over 19 tons of food to regional airports on June 18.

“And this year it will be close to twice that,” Chapman said.

Robertson said he developed the idea behind MFN while volunteering to help people experiencing homelessness on Lummi Reservation as well as working with Lummi Nation to build Silver Reef Casino on Haxton Way. Robertson said that making connections is his approach to the problem of hunger.

“Hunger’s a symptom,” he said. “The problem is the lack of social mobility. There’s plenty of food, but the key is getting it into the mouths of people.”

What distinguishes Robertson’s efforts is the growing scale of his work, where friends in California have offered the use of semi-trucks to haul the tons of food otherwise bound for landfills. Two percent of what’s now dumped into landfills could feed many, if not all, of people experiencing food insecurity, Robertson said.

The extent to which Robertson’s operation is growing and the partners and volunteers he is gathering makes them an essential part of meeting a major disaster.

“MFN’s network covers the ‘last mile’ connecting resources to human needs without hesitation. Our volunteers were one of the first responders with food to the community of Sumas during the November 2021 floods because MFN was already connected locally through its past service,” Robertson said.

In Whatcom County, a potential emergency could be a major earthquake along an offshore 621-mile fault line that historically has produced major quakes from a magnitude of 8 to 9.

Severe damage may range from northern Vancouver Island to California. “It’s not a question of if, but when,” said pilot Sky Terry, northwest regional emergency services director for EVAC.

Major earthquakes have occurred every 300 to 500 years along this fault line, known as the Cascadia Subduction Zone. The last big earthquake it produced occurred 322 years ago. “We’re in the window,” Terry said. “It may have already happened by the time people read this. We need to be ready.”

Called “the big one,” the earthquake is expected to compromise roads, rails and bridges especially on the coast, making supplying relief difficult to impossible. To prepare, Terry along with other EVAC and Disaster Airlift Response Team (DART) pilots affiliated with the West Coast General Aviation Response Plan held a disaster drill called “Thunder Run” at Bellingham International Airport on June 18.

Over 50 small aircraft and pilots flew close to 19 tons of food in and out of Bellingham and other regional small airports all over the northwest and into B.C. under a tightly audited system designed by MFN.

These small planes are ideally suited for this type of relief as they can carry up to a half-ton or more, and land on a variety of improvised airstrips.

The weather for Thunder Run was not ideal, but the mission was accomplished despite some pilots canceling. Among the pilots were highly-skilled retired captains from major airlines, such as Doug Cole of Delta and Jim Higginson of Air Canada.

EVAC and DART pilots have been doing practice runs since 2009, and last weekend’s exercise in teaming with MFN demonstrated that when the time arrives, help will be on the way.

For more information, go to MFN’s website at miraclefoodnetwork.org. Rated pilots with at least 250 hours of total time can find out more about participating at EVAC’s website, evac.org.