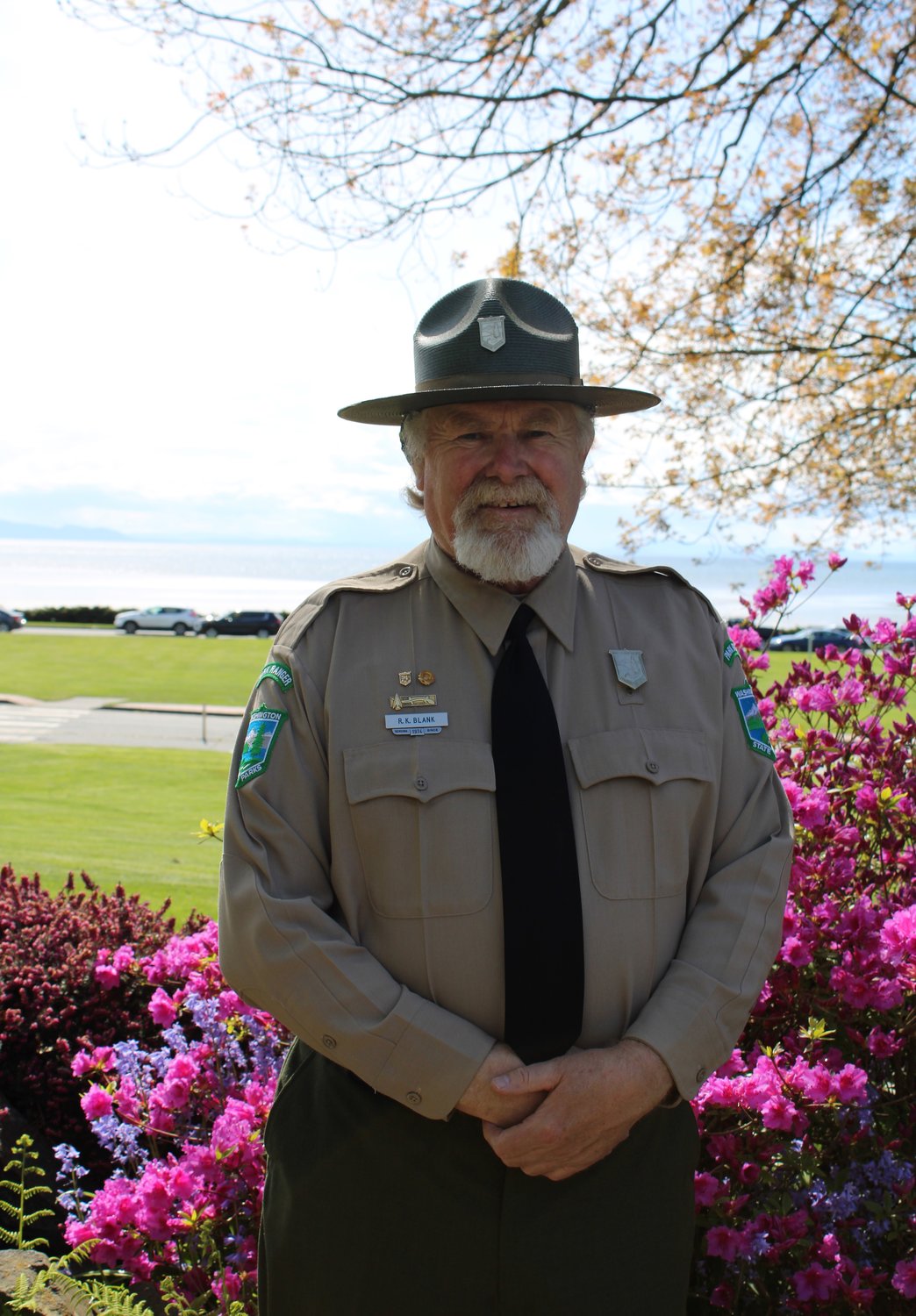 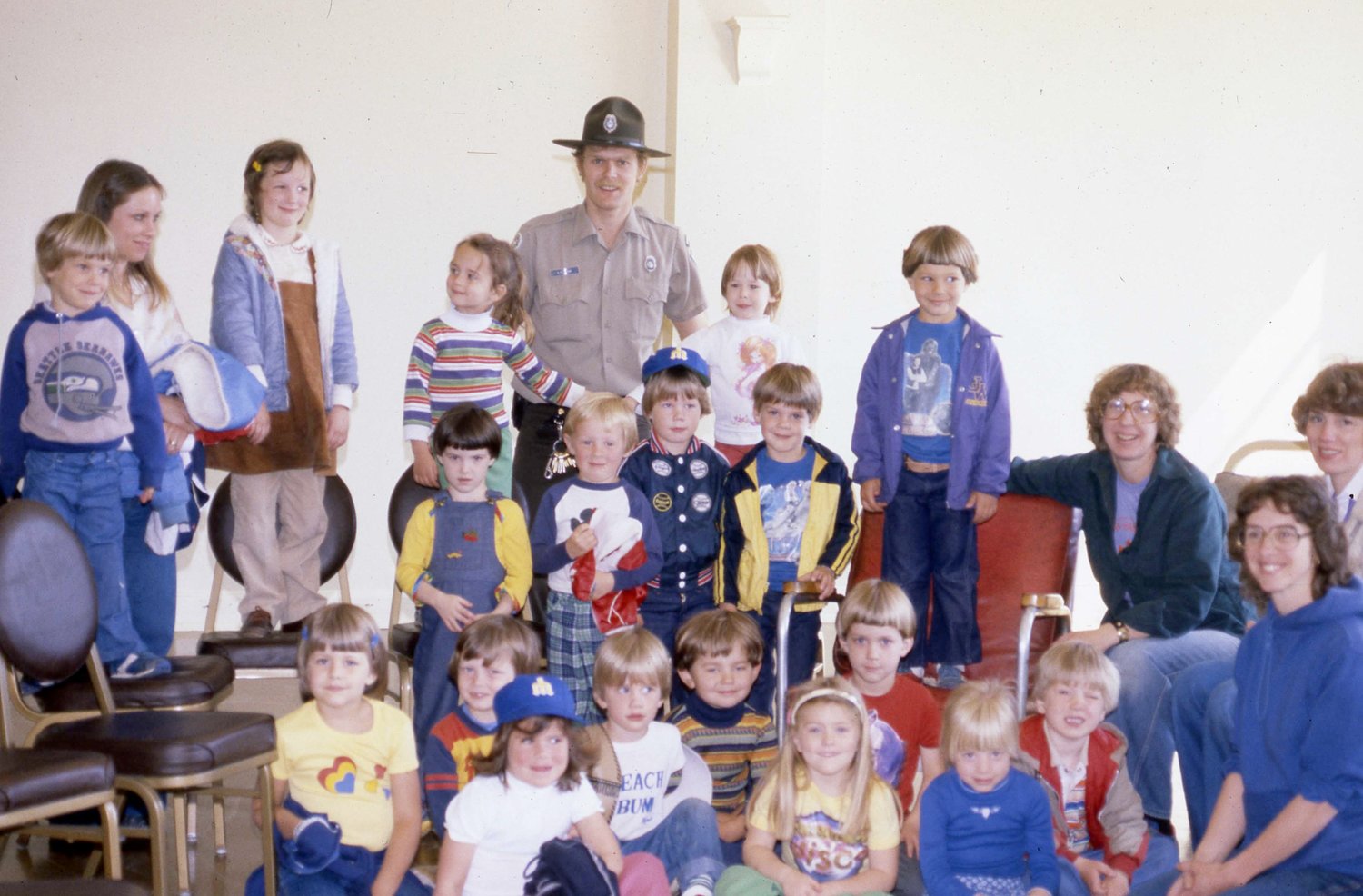 Ranger Rickey Blank, c., with a class he led on an outdoor educational interpretative walk in Kenmore’s Saint Edward State Park, where he was a park manager in 1981.
Photo courtesy Rickey Blank
Previous Next
Posted Wednesday, May 25, 2022 5:23 pm
By Hannah Cross

“I like to say I arrived at Peace Arch by natural law,” Blank said. “I had a lot of opportunities but I’m glad I ended up here.”

He said Peace Arch is an outstanding place to meet people from all over the world and has given him the ability to stay close to his daughters who reside in Vancouver, B.C. as well as his church and extra-curricular activities he enjoys, such as ballroom and country dancing.

Blank started his career as a seasonal park aide at Sequim Bay State Park on June 1, 1970, the day after he graduated high school. He thought it would be temporary as he wanted to go to college to become a high school teacher and basketball coach at the time, but quickly fell in love with the parks. After two full years of service as a seasonal park aide and youth corps supervisor from 1970 to 1973, he became a commissioned park ranger on February 10, 1974.

His next big career move was working as Deception Pass State Park’s operations and maintenance officer for 30 years. It was from there that Blank transferred to Peace Arch.

He said as an older ranger who has been with WSP for nearly half of its existence, WSP leadership thought he was the perfect candidate. “Since I first started at Peace Arch on January 1, 2019, I have tried my best to offer superior customer service with a smile every day,” he said.

Amber Forest, who is a park ranger and Whatcom County area manager, said she has been working with Blank in the same region and agency since she first started with WSP in 2000 as a park aide when he was stationed at Deception Pass.

“I became Rickey’s supervisor in 2018 and since then I have had the pleasure and honor of supervising someone like ranger Blank,” she said. “He is articulate, motivated, detail-oriented, has great customer service skills, is a wonderful asset to our community and a joy to work with.”

Forest said Blank brings a passion for his work and loves to interact with people visiting Peace Arch.

“He has extensive knowledge and background in grounds keeping and gardening, which is very helpful for his new station,” she said. “He’s an absolutely wonderful human being, and myself and the staff want to congratulate him on 50 years of service.”

Sherri Button and her family were one of many families separated by the U.S./Canada border closure who met at the park regularly during the pandemic.

“Ranger Rick has had such a positive impact at the park,” she told The Northern Light in an email. “He works hard daily to keep it beautiful and well-kept so that people can enjoy its true beauty.”

Button said it was evident how much Blank genuinely cares about the park and his desire for everyone to enjoy it. She said Blank managed the influx of park guests well during the pandemic and always was kind when asking people to follow the rules.

She also said she and her family were beyond grateful for Blank’s work keeping the park open and allowing families to visit while the neighboring B.C. Peace Arch Provincial Park closed. She described him as a light in the world who brought hope to many cross-border couples and families.

“It truly was a hard time and still is, not being able to visit the ones you love whenever, but he made the difficult time a little more bearable,” Button said. “If it weren’t for him, my parents would not have been able to see my first son and their first grandchild.”

Blank said he was fortunate to raise four daughters in state parks.

“My favorite memory is of this tree stump at Bowman Bay we’d use as a stage,” he said. “My daughters would act, sing, tell stories, give speeches and recite poems to me as I sat on the lawn.”

Blank said in his 50 years, he’s seen the park system grow and change in exciting ways. He has helped implement engaging informational brochures, reservation systems, equipment upgrades and the permanent hiring of five new staff members at the park.

“I’ve been very blessed with good staff and a community that appreciates our hard work,” he said. The friends of Peace Arch State Park donated nearly $1,300 and a week later Blaine Chamber of Commerce awarded the park over $2,000 because it remained open during the pandemic, Blank said.

With those generous donations, Blank said the park staff has added additional plants, shrubs and trees and plans to continue servicing the park to fit the immediate and future needs of the community. “We are currently brainstorming ways to make the park even more accessible and enjoyable for everyone who comes to visit,” he said.

Blank said he hopes he never has to retire because working for WSP continues to bring him as much joy as the day he started.

“I realize how blessed I’ve been throughout these 50 years,” he said. “I can’t thank the visiting public and community enough for all the opportunities and memories so far.”