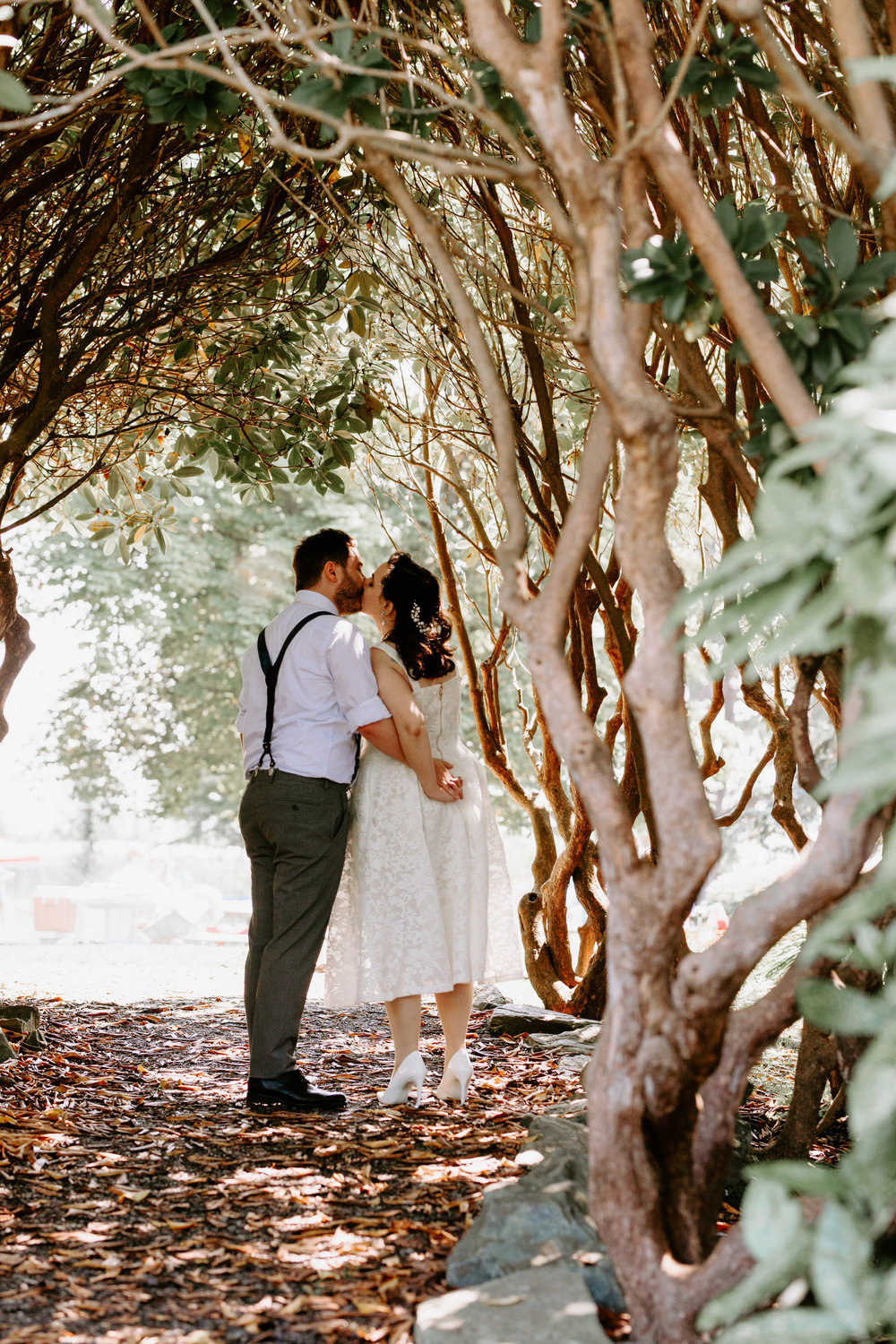 Jacob, l., and Courtney Skelcher were married at Peace Arch Park on August 1, 2020 after deciding against waiting for the border to reopen.
Photo by Cat Dossett
Posted Wednesday, July 21, 2021 3:49 pm
By Emily Feek

Last summer, Peace Arch Park hosted as many as 12 weddings a day as cross-border couples raced to the altar. This summer, the park has increased regulations, permitting only two large events but still allowing an unlimited number of small events.

The permits are a result of increased park damage from tents and canopies that used stakes or pegs in the ground.

“The park was being overused and the resources were definitely being damaged,” Blank said. “They were bringing things to set up, chairs, arbors or whatever, and what happened last year, with all the tents and sun screens and canopies – we ended up losing half a million dollars’ worth of irrigation in the park, which is substantial.”

Len Saunders, a Blaine immigration attorney who visits the park most days to meet clients, said he has seen a comparable number of weddings to last summer.

“What a lot of people did when they only allowed spouses entry to Canada was they would literally get married in the park, get in the car, drive down to Bellingham, file the marriage certificate and then drive back into Canada,” he said.

Though the U.S. land border currently doesn’t have exemptions, anyone can fly into the country. Saunders compares the closed border and open airports to locking the front door of your home but leaving the back door open.

David Poon founded Canadian non-profit Faces of Advocacy in May 2020 to push for those exemptions after his partner was turned away at the border. There was no movement for family reunification at the time, Poon said, so he started a letter-writing campaign.

“There’s no reason to rush a wedding at the Peace Arch just to bring your partner to Canada,” Poon said.

Despite the extended family exemptions, Poon said Faces of Advocacy continued to push for family reunification for those separated.

The Peace Arch park weddings aren’t only held to get into Canada though, Saunders said. Couples also host weddings out of convenience for the couple and attending family members. It’s also the only place along the border where couples can meet without quarantine restrictions, which will remain in effect for fully vaccinated travelers until August 9.

Chris Irlam of Chilliwack, B.C. married her wife at Peace Arch Park on November 1, 2020. She and her wife met at the park every three weeks during the pandemic but were concerned that the park might close. Their decision to get married was partly based on the concern that they might not be able to continue meeting at the park, but they were also committed to each other.

“It started out as a functional decision, but I can’t imagine making any other decision now,” Irlam said. “I’d show up to the park to marry her every day if I could.”

Their wedding was a small event. Irlam and her wife got married in their street clothes with only a few people in attendance.

Cape Cod, Massachusetts resident Jill Hollenbach had a similar experience. When she married her wife Kristina Macdonald at the park in April, their witnesses were strangers, she said.

Hollenbach and her wife had discussed getting married, but the border closures expedited their decision, she said. And while Hollenbach acknowledged that she could physically go to Canada, the mandatory hotel quarantine and two-week quarantine complicated travel. The circumstances led them to decide to wed at the park.

“We both joke about how if we were any less in love, we wouldn’t be where we are, because it isn’t easy or cheap,” Hollenbach said, noting she lives on the east coast and her wife lives in Winnipeg. “You have to know how committed you are to even want to go through this process. There’s nothing about it that is easy or spontaneous.”

For other cross-border couples like Courtney Skelcher and her husband, who had also been considering marriage, the pandemic encouraged them to wed sooner than later.

“Covid-19 happened and it went from, ‘Maybe we’ll get engaged sometime this year and married in the next year or two when all our family can be there,’ to ‘Oh my gosh, I don’t want to wait,’” Skelcher said.

The wedding was small, but they still wanted it to be special. The couple dressed up in formal wear and had Skelcher’s sister, a professional photographer, take wedding and engagement photos. The couple’s family, scattered across Canada, Alaska and New York, attended via Zoom.

Large events such as weddings that require special shelter set-ups are still allowed with a special activity permit, which visitors can apply for on the Washington state parks website at bit.ly/2UjJ5hS. Blank also encouraged people to reach out to him via email at Rickey.Blank@parks.wa.gov to discuss the permit process. Special activity permits should be applied for at least 30 days in advance.

The American Kitchen, a shelter at Peace Arch Park that can accommodate up to 100 guests, is also available to reserve as of March, Blank said.

Blank said the permit limit of two large weddings per day were full most summer weekends, and permits for the rest of the summer have been filling up as well.

Small weddings with a couple, officiant and two witnesses that require no special set-up are allowed without permits as well, Blank said.

The permits will remain in effect after the border reopens. People are welcome to come to the park and sit down on blankets or at picnic tables, but tents and similar shelters will only be allowed by permit to avoid park damage, Blank said. Camping tents, screens and other shelters can still be placed on the east lawn until the U.S./Canada border reopens.

“We’re handling more people than ever, but everything is controlled and it isn’t the Wild West like last summer,” Blank said.