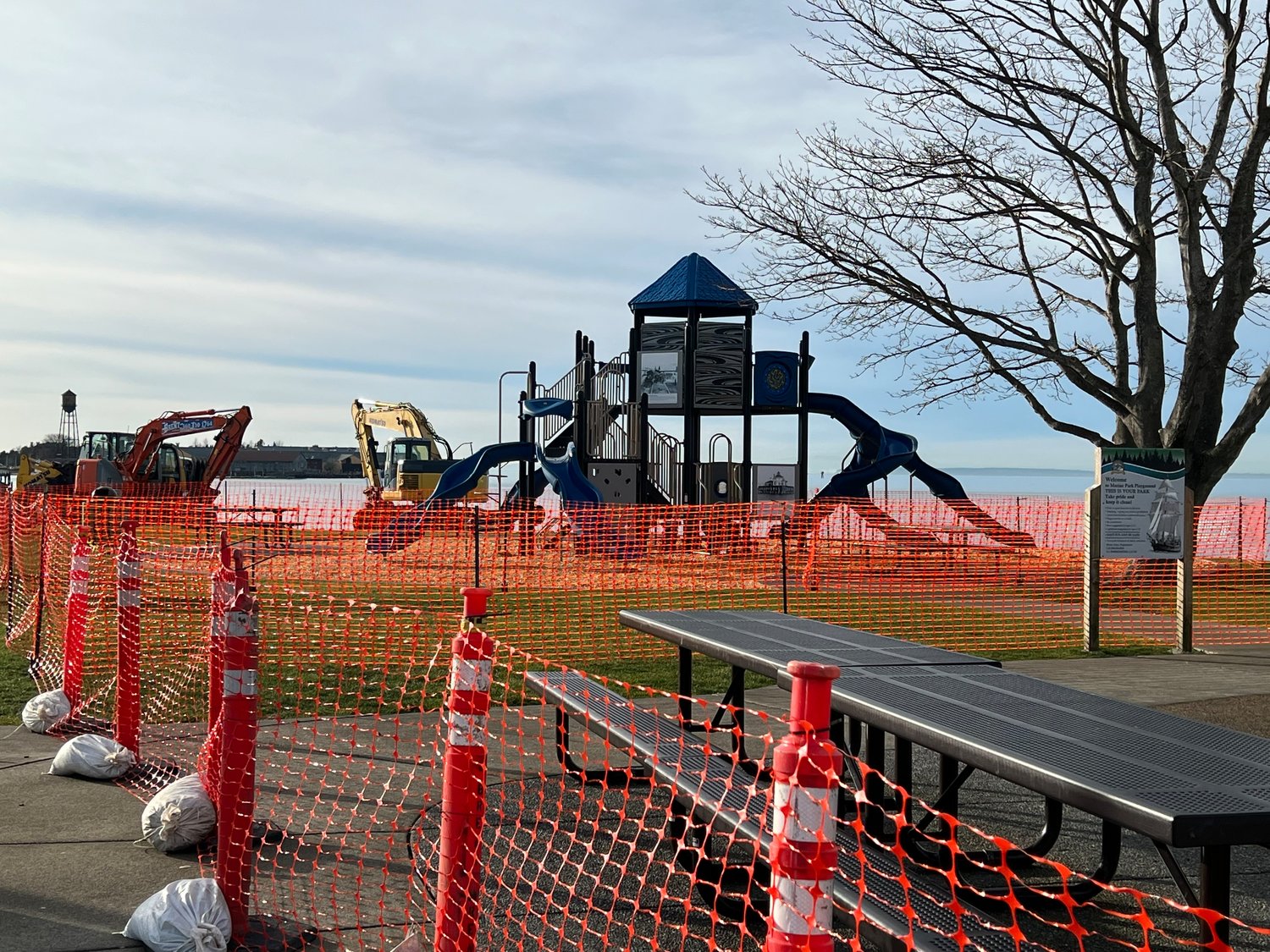 The Blaine Marine Park shoreline will be under construction near the playground area until mid-February as the city of Blaine finishes its decade-long Marine Park Reconstruction Project. The playground will be closed until Wednesday, February 15. The project’s second phase will repair the remaining shoreline and add two pocket beaches near the Lighthouse Point Water Reclamation Facility this fall.
Photo by Molly Ernst 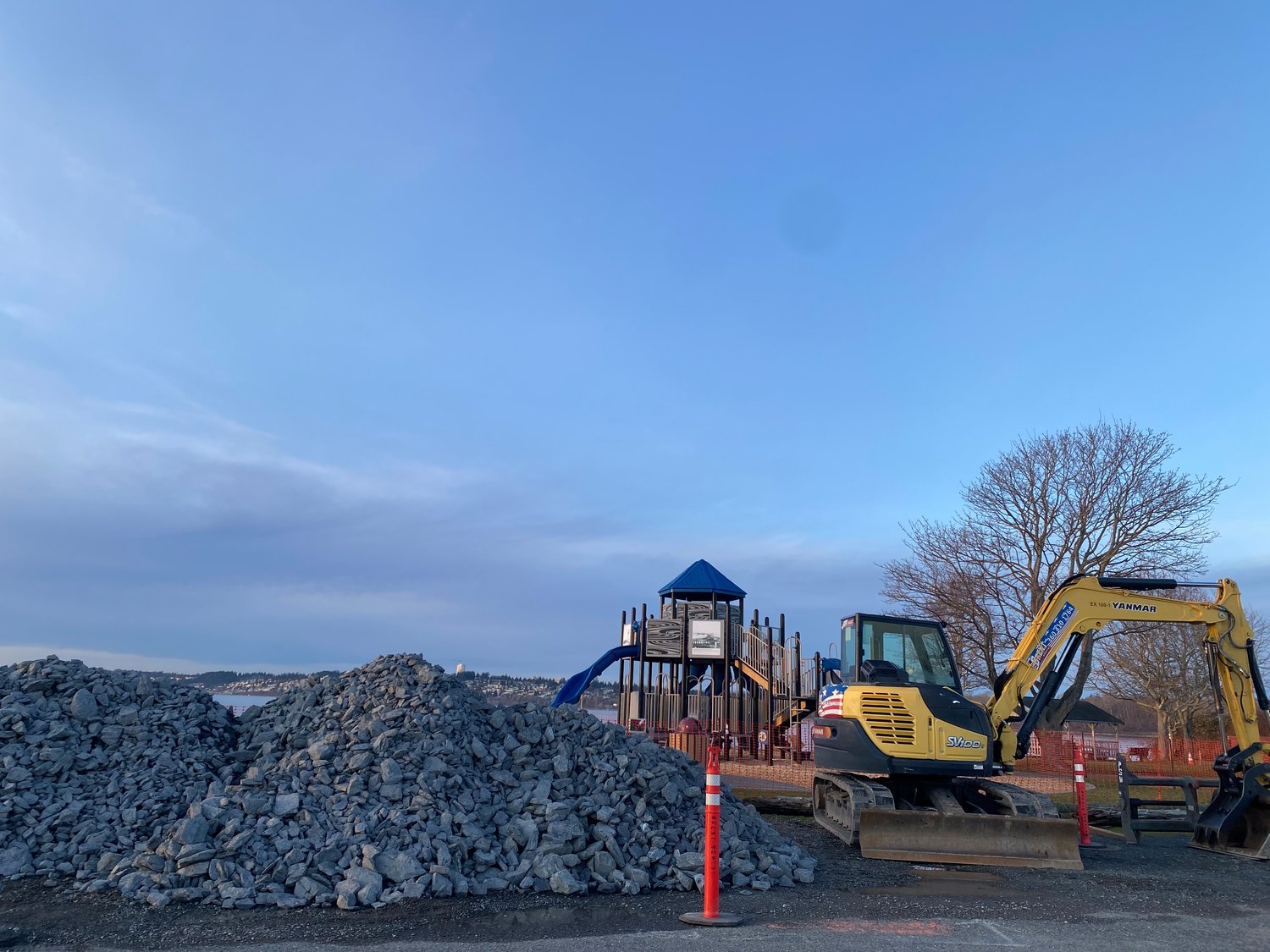 The Blaine Marine Park playground will be closed until Wednesday, February 15, as the city of Blaine begins remediation work to clean the shoreline and reduce erosion. The construction ends the city’s decade of work on its Marine Park Reconstruction Project.

“I hope people are patient as we make these improvements,” said Alex Wenger, the city’s tourism and economic development director. “We’ll also take the opportunity while the playground is closed to clean it so when it reopens, the playground is ready for springtime.”

The reconstruction project will remove broken concrete and debris and add rock materials to 600 feet of shoreline from the end of the park on Marine Drive to the Lighthouse Point Water Reclamation Facility, according to the city. The project will improve shoreline access and safety, while controlling erosion and improving the habitat for fish and waterfowl.

Wenger said the project is expected to finish below its $900,000 budget. Blaine City Council approved the city entering a nearly $600,000 construction contract with Premium Services Inc. for the project during its December 12, 2022 meeting. A $500,000 grant from the Washington State Recreation Conservation Office’s ALEA program paid for the majority of the project, with the city’s park capital improvement funds supplementing the remaining funds.

JIJ Corporation owners Skip and Katie Jansen, who are developing East Harbor Hills in east Blaine, donated about $30,000 in rocks for the project. Council approved the donation of the 400 tons of rocks during its December 27, 2022, meeting.

In 2011, the city completed the reconstruction project feasibility study that assessed the project and then, in 2014, improved 400 feet of shoreline during the project’s first phase.

This year’s improvements will be done in two parts. Replacing rock along the shoreline is expected to be completed by February 15. Two pocket beaches and two headlands will be installed near the water reclamation facility in October and November. Wenger said the city wanted to get as much of the project finished now to protect the shoreline from winter weather.

The park will reopen mid-February and will temporarily close for the remaining construction in the fall. The park trail will be resurfaced and open this spring and summer. Signage and landscaping improvements will also be added, Wenger said.

Last March, the city finished minor repairs to the old landfill site on the eastern side of the park that eroded during a January 2021 storm. Wenger said the city decided not to pursue a permanent fix.

“The project is the last phase of these planned improvements to the marine park shoreline,” Wenger said. “With the playground and the Lighthouse Point Water Reclamation Facility being completed, this is the last big improvement there.”