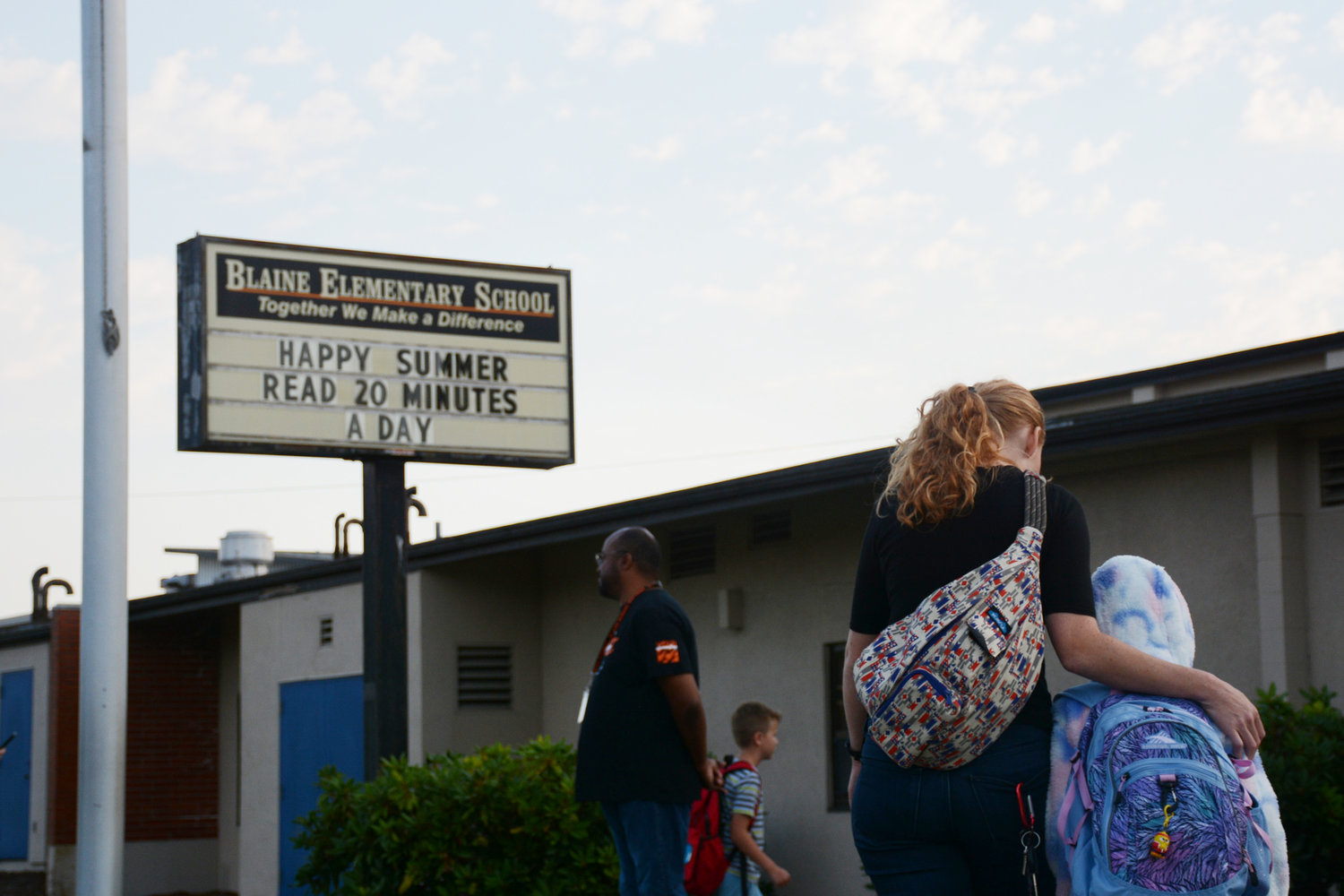 Blaine educators were feeling ready for this school year.

At a time when national polls show teachers are less satisfied than they have been in decades, most Blaine school district staff are satisfied with their jobs and feel they have a healthy work environment, according to a recent staff survey.

Over 80 percent of staff that responded said they were motivated, satisfied and enjoyed the current culture in the district.

17,000.Solutions founder Rich Hazzard presented the staff survey results at a Blaine school board meeting October 24 in Point Roberts. 17,000.Solutions is a research, consulting and design lab organization dedicated to public school improvement, according to its website.

Superintendent Christopher Granger said the district chose 17,000.Solutions to conduct its staff support project because, along with gauging staff morale, it will develop solutions to improve district culture. He said it’s intended to help the district rebound from the pandemic.

Pandemic-related issues are not specific to Blaine. School districts across the country are struggling to bounce back.Forty-three percent of teachers polled in a national survey conducted by EdWeek Research Center said they were dissatisfied with their job. According to the survey, which polled 1,324 teachers between January 9 and February 23, only 12 percent of K-12 teachers said they were “very satisfied” with their job. The percentage dropped by 27 percent from 2012 to 2022. This is the lowest in the 34 years for which the survey had data.

An Education Week article published in September said the pandemic is largely to blame. Students’ mental health and well-being suffered while they lost the equivalent of several months’ worth of learning in reading and math.

Parents related its effect on their kids. Most parents said the first year of the pandemic curbed their children’s education, according to an October 26 article from Pew Research Center, a nonpartisan Washington, D.C., think tank. Forty-four percent of those parents said this is still the case.

Teachers returning to the classroom had to recover lost ground, which took a toll on Blaine staff last school year.

Every year Blaine school district’s employee union, Blaine Education Association (BEA), conducts an anonymous survey with school staff to get a sense of the overall school climate. Most years it’s used within BEA as background. But last school year’s, which was conducted April 7, was submitted to the school board due to the nature of the responses, and The Northern Light obtained a copy through a public records request.

Sixty percent of members who took the survey said they were dissatisfied with the overall climate of the district; however, 57 percent of members were pleased with the climate in their main building or worksite. Many said in the comments that Granger and the school administration were at fault for their overall dissatisfaction.

“The district has completely changed under Granger,” one member wrote of the superintendent who was hired in August 2019. “Top down decisions, climate of fear; lack of inclusion, communication.”

Another member summed up much of the comments, on both sides.

“There was no choice for what I see: some are extremely satisfied with the new administration at the buildings and others felt like some mistakes were made and no longer trust that things will get better,” they wrote. “I do believe Dr. Granger can at times micromanage and this is not the style Blaine is used to. However, he has made unpopular decisions that needed to be done. Covid and change has affected everyone, and I think there is years of not trusting admin getting in the way. … The love of teaching is lost, and teachers are too tired to please all sides. Sorry but reality.”

But staff were positive at the beginning of this school year, according to the new anonymous survey from 17,000.Solutions, which received 275 responses.

“These are really good numbers,” Hazzard said. “In light of how stressed out everybody was at the end of last year, I would have thought these numbers might have been lower.”

If staff took the survey in May, Hazzard said the quantitative results would have been different.

Board member Don Leu, who has over 50 years’ experience in education, said it’s an issue of timing. Leu said the qualitative data is likely more reflective of past experiences related to the pandemic and other possible frustrations.

It took 26 minutes on average to complete the survey. In total, that accounts for 120 hours of staff time, which Granger said during the meeting, was not a small investment for the district. The responses were then used to devise a roadmap of areas for staff to focus on to support each other.

Hazzard said the qualitative feedback consisted of over 200 pages of staff comments. Based on the feedback, Hazzard said 80 percent of staff were positive while 20 percent said they were struggling.

Some of the staff criticisms were grouped into themes of not feeling heard or supported, distrust or pessimism, lack of time, inconsistent expectations and unrealistic demands, things getting in the way of what happens in the classroom, and more vertical communication than horizontal. No specific comments were provided in the presentation.

Asked by Leu whether the comments would be provided, Hazzard said he would leave that up to Granger.

Hazzard began the presentation listing sources that heighten school staff stress levels. They include politicization of school district communities, lost learning, increase in mental health needs of students, increase in student misbehaviors and Covid-related personal challenges. He also mentioned a statistic from RAND Corporation, a U.S. research organization, that says one in three people who say they will or want to leave a school district will leave the district.

Toward the end of the presentation, Hazzard provided areas for administration to focus on to improve staff support: professional development; culture, relationships and teams; job satisfaction and motivation; joy, fun; recognition; and personal health and wellness.

Granger then provided strategies that could be implemented for each category. In personal development, he listed crucial conversations for district leadership and staff as well as a heightened focus on diversity, equity and inclusion. Other improvements included consistent staff enforcement, more engagement and collaboration, taking input inventory, staff potlucks, more student and staff success assemblies – not just for sports, improving staff recognition, and providing wellness spaces and access to fitness classes.

With the improvements devised, the district will work to implement them over the school year and evaluate their effectiveness at the end of the year.

“I would like to commend the administration for recognizing an important problem and looking at it head on, and working to solve it,” Leu said. “I think that says a lot about both our district, and the trust behind one another, and in the leadership team. So I really want to congratulate the leadership team.”

Hazzard said the type of model this engagement project used, with a thoughtful quantitative and qualitative balanced approach that translates into action, is unique. He said every district should have a research aide to conduct such work and provide even more feedback than the survey.

Board president Dougal Thomas thanked staff during the meeting for taking the time to participate.