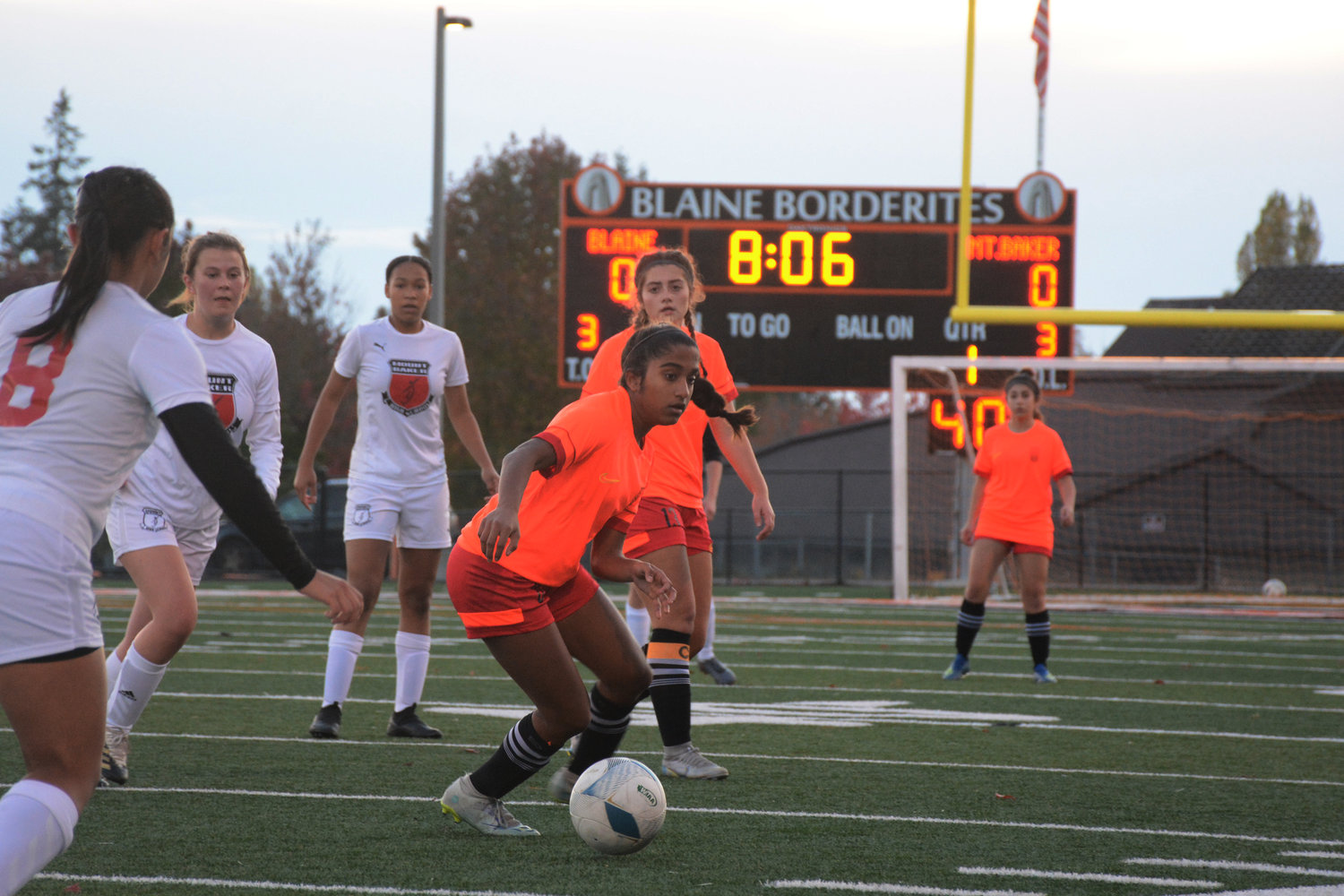 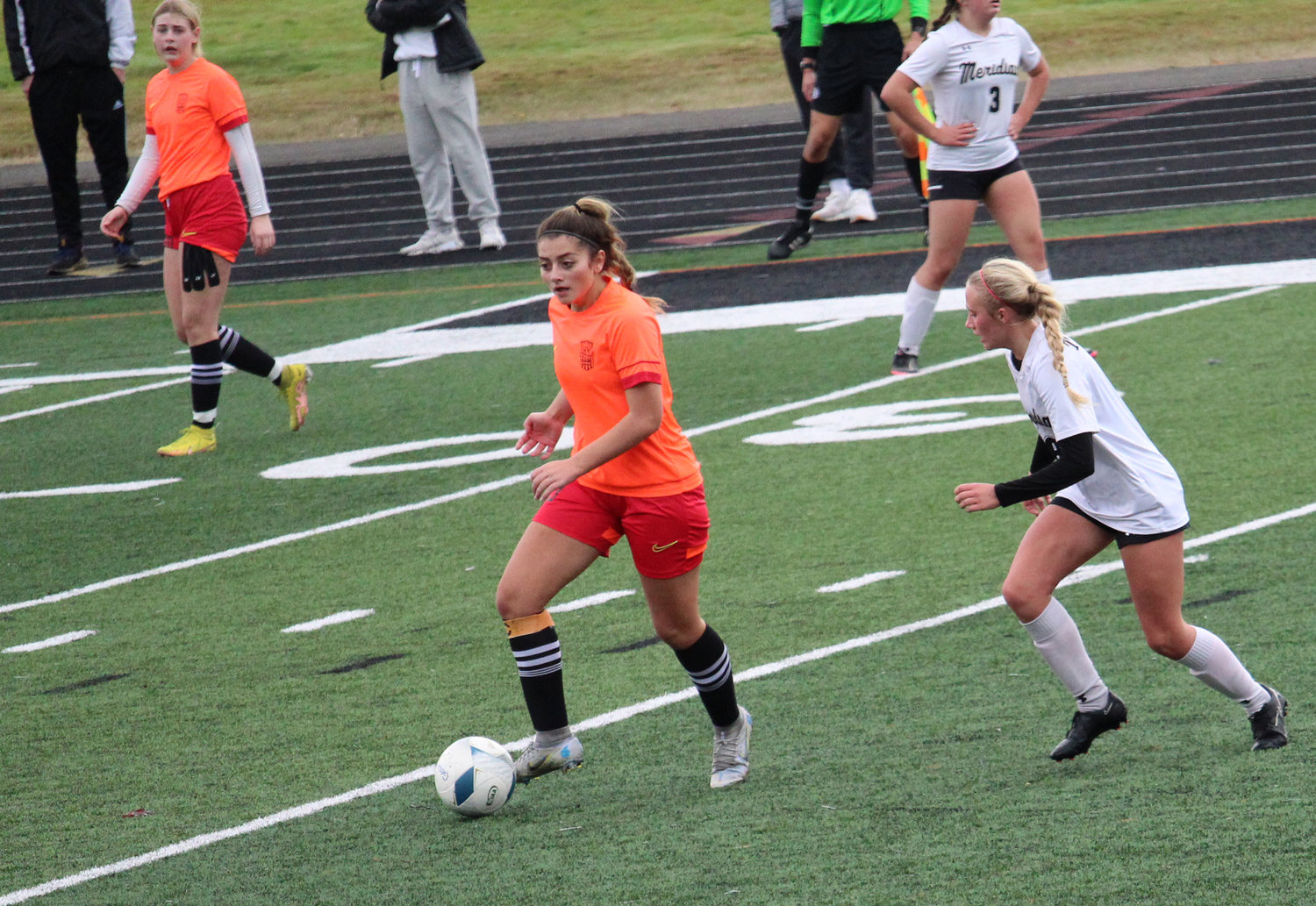 Blaine senior Kristina Roby with the ball during a 1-0 loss to Meridian on October 29.
Photo by Molly Ernst 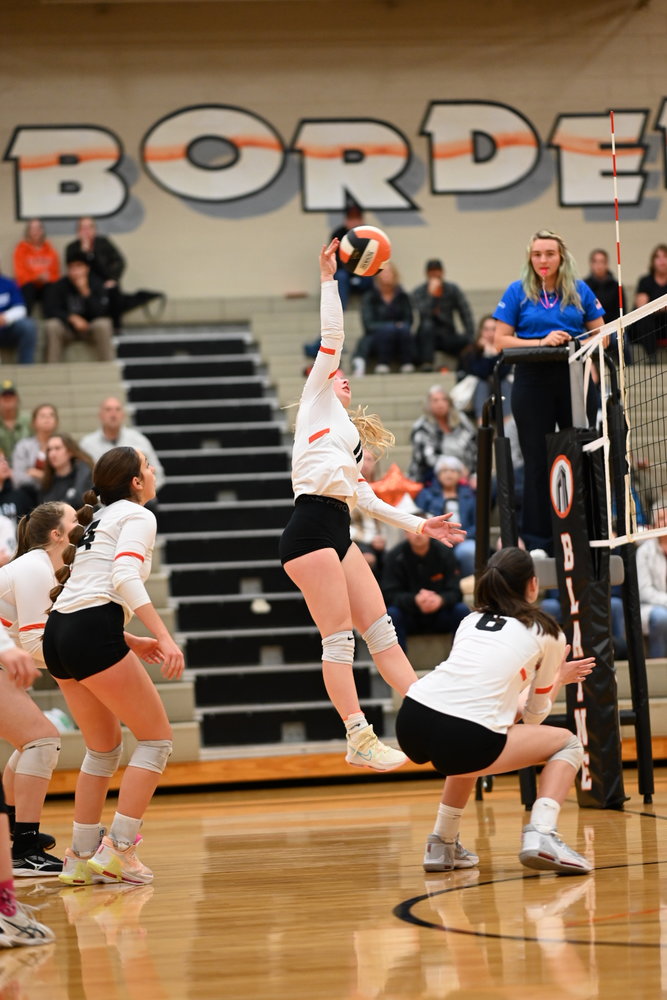 Blaine girls soccer advanced to the district 1 runner-up game on Thursday, November 3 at 7:30 p.m. at Borderite stadium after beating Mount Baker High School 5-0 November 1. The Lady Borderites will face Meridian Thursday night. If they win, they advance to the bi-district games.

On Tuesday night, the girls took control of possession but struggled to make any of their early chances count, while the Mountaineers looked to play counter-attacking soccer. Blaine beat Mount Baker twice in the regular season.

The turning point came late into the first half as senior Madeleine Ernst beat the hesitating Mount Baker goalkeeper to a ball behind the Mount Baker defense. Ernst knocked it past the onrushing keeper who slid through the striker inside the penalty box. Denying a goal-scoring opportunity, the referee had to produce a straight red card.

Senior Kristina Roby stepped up to take the penalty as one of Mount Baker’s forwards replaced their sent-off keeper. Roby slotted the ball into the bottom left corner, giving Blaine a 1-0 lead going into halftime.

“I think we controlled the game before the red card but the red card changes everything, especially when it’s the keeper,” head coach Gio Quesada said.

The one-player advantage made all the difference in the second half. Roby grabbed her hat trick, scoring twice more, and sophomore Juliana Zuzarte and freshman Beatrice Dickson each got one.

Blaine came into the game on the back of a 1-0 loss to Meridian, who they play Thursday, with two starters injured. Seniors Ava Curtright and Piper Nissen made up half of the Borderites defense, but picking up injuries at the end of the season Quesada has had to change his system.

Senior midfielder Evellina Yuryev has filled in for Curtright, who Quesada said is the best defender in the conference, at center back. And the team has relied on younger players in midfield.

Quesada said he’s thankful for all the work the experienced and inexperienced players have put in to the team this season and in playoffs. He said he’s been asking the team to work extra hard for the injured players.

“Last night it worked and I hope it works [Thursday] as well,” Quesada said.

The Lady Borderites finished their season at Meridian High School November 1 as they lost 3-1 to Lynden Christian in the first round of playoffs.

The girls finish their season with a 4-13 record.

The Borderites lost 44-7 to Nooksack Valley High School October 28 in their last conference game of the season.

Blaine will play Cedar Park Christian Friday, November 4 for its last regular season game. The Borderites have a 1-8 overall record this season and were 0-4 in conference.