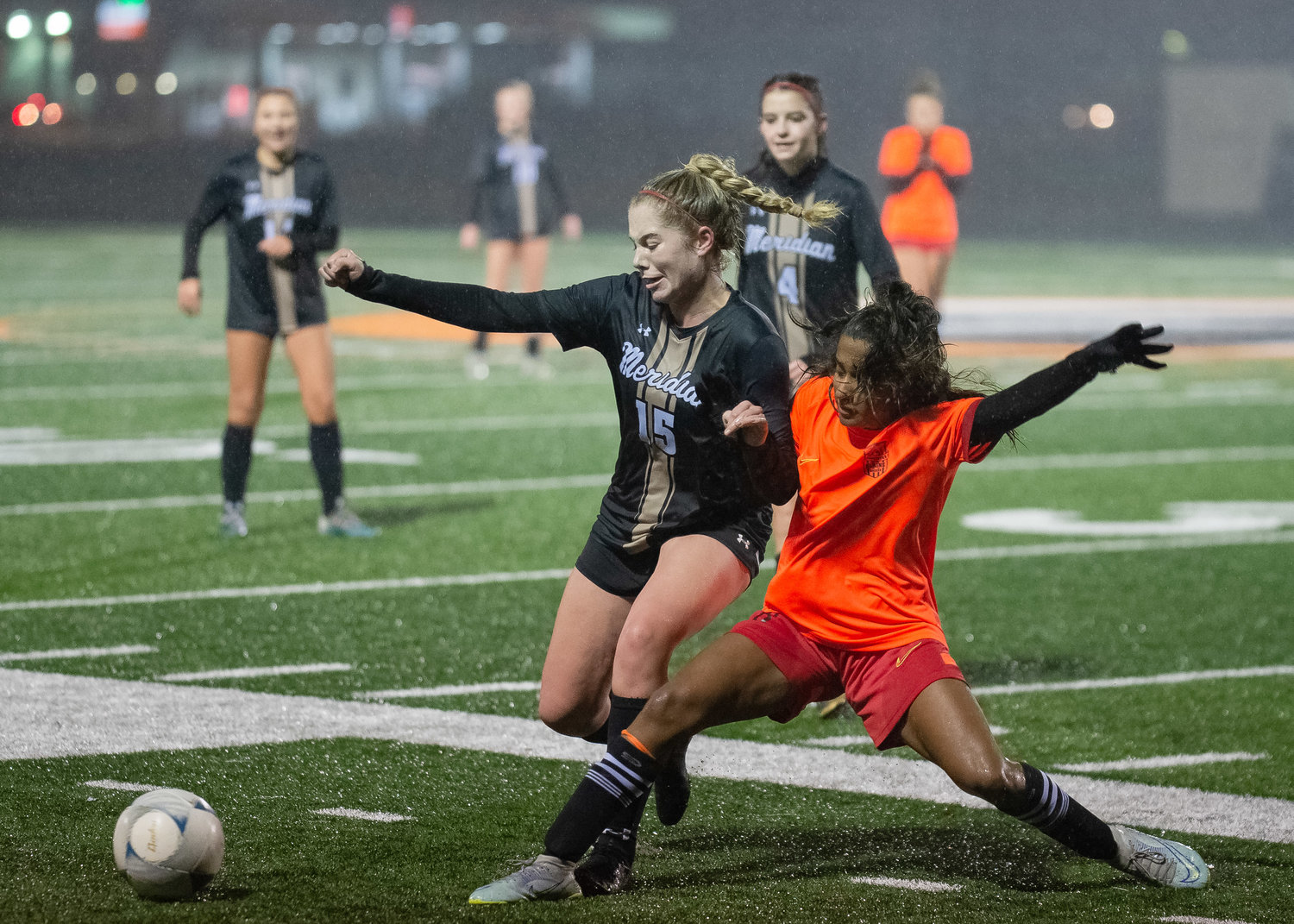 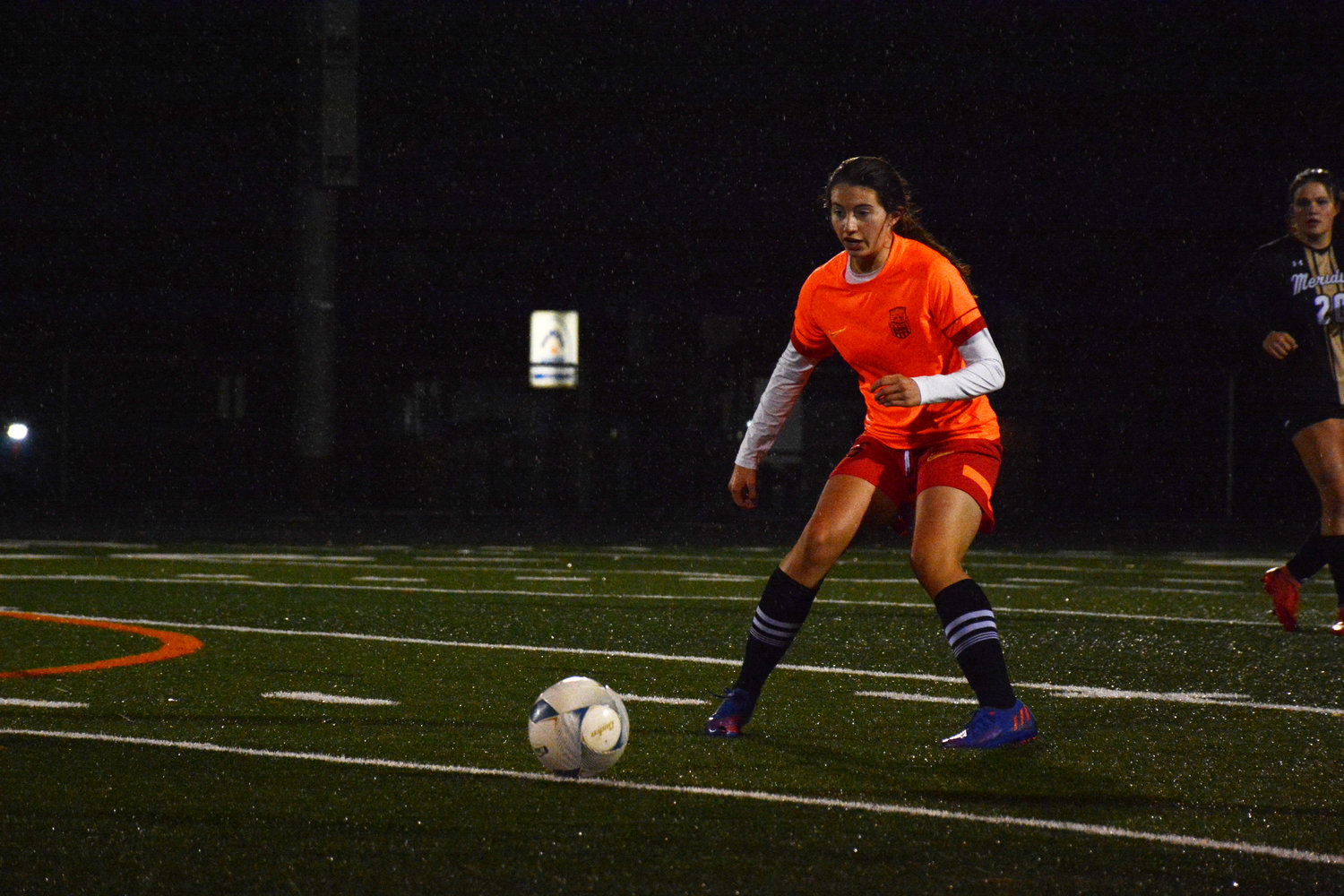 Madeleine Ernst receives a pass on the turn in Blaine’s loss to the Meridian Trojans November 3.
Photo by Ian Haupt
Previous Next
Posted Wednesday, November 9, 2022 4:10 pm
By Ian Haupt

Having made it to the bi-district playoffs last year, head coach Gio Quesada said his goal for the team this year was to make it back to bi-districts in Seattle. Penalty kicks are a flip of the coin, Quesada said.

Not much has been able to separate Blaine and Meridian this season. Going into the game, they had already played each other three times this season. Both teams had a 1-0 win and a draw.

The Lady Borderites started the game strong. Sophomore Kaela Bowman gave Blaine the go-ahead goal less than 10 minutes in. With her left foot, Bowman swept a loose ball in the box that the Trojans failed to clear from a corner kick into the back of the net.

Blaine beat the Trojans at Meridian in similar fashion in conference action this season. They scored off a corner late into the first half and held on to the one goal advantage with a strong defensive performance in the second half. But Blaine had to hold on for too long last Thursday night.

Ball possession was even until the end of the first half when the momentum shifted. Blaine began to sit back more on defense and rely on counter attacks while the Trojans looked for an equalizer. It became a midfield battle, with few shots on goal. Rain, wind and cold temperatures did not help and made it rough on spectators.

With 13 minutes left in the game – almost out of nothing – a Trojan midfielder took a shot from about 35 yards out that deflected off a Blaine defender looping over sophomore goalkeeper Larissa Pluschakov, who was caught off her line. The team was stunned.

Senior captain Evellina Yuryev, who was filling in for injured seniors Ava Curtright and Piper Nissen in defense, tried to rally the young team on the field while top goalscorer Kristina Roby reentered the game after subbing off injured in the first half. Neither team found a winner before the end of the game and through the two five minute extra time halves. Only penalties could separate them.

Blaine shot first. The girls missed their third and fifth penalties while the Trojans made all of theirs, sending them on to bi-districts.

“The team put a lot of effort on the field,” Quesada said. “The team is very fresh and got a lot of experience out of the game. I’m super happy.”

Quesada said the girls have been improving tactically and that he was especially proud of how players stepped up to fill the positions of injured players. He also thanked parents and students for all the support this season. He said he’s been watching the support grow over the years.

Freshman Hailey Ferrell won both the 50-yard and 500-yard freestyle races. She won the 50 free in 25.69 seconds, a faster state qualifying time than she already had, and the 500 free in 5:32.61, another state qualifying time. She will go on to compete in both events at the state meet at King County Aquatic Center in Federal Way from Thursday, November 10 to Saturday, November 12. Ferrell is seeded fourth in the 50 yard.

Blaine’s team placed sixth in the 200-yard medley relay with a time of 2:38.90. Freshman Eden Shields, Ferrell and seniors Sylvie Lausier and Jade Shields made up the team.

Landon said as coaches they enjoy encouraging swimmers and watching them grow in a sport they can do their whole lives.

The Borderites lost 33-15 to Cedar Park Christian November 4 at Blaine High School stadium in their final game of the season. Blaine finished the season with a 1-9 overall record and 0-4 record in conference.