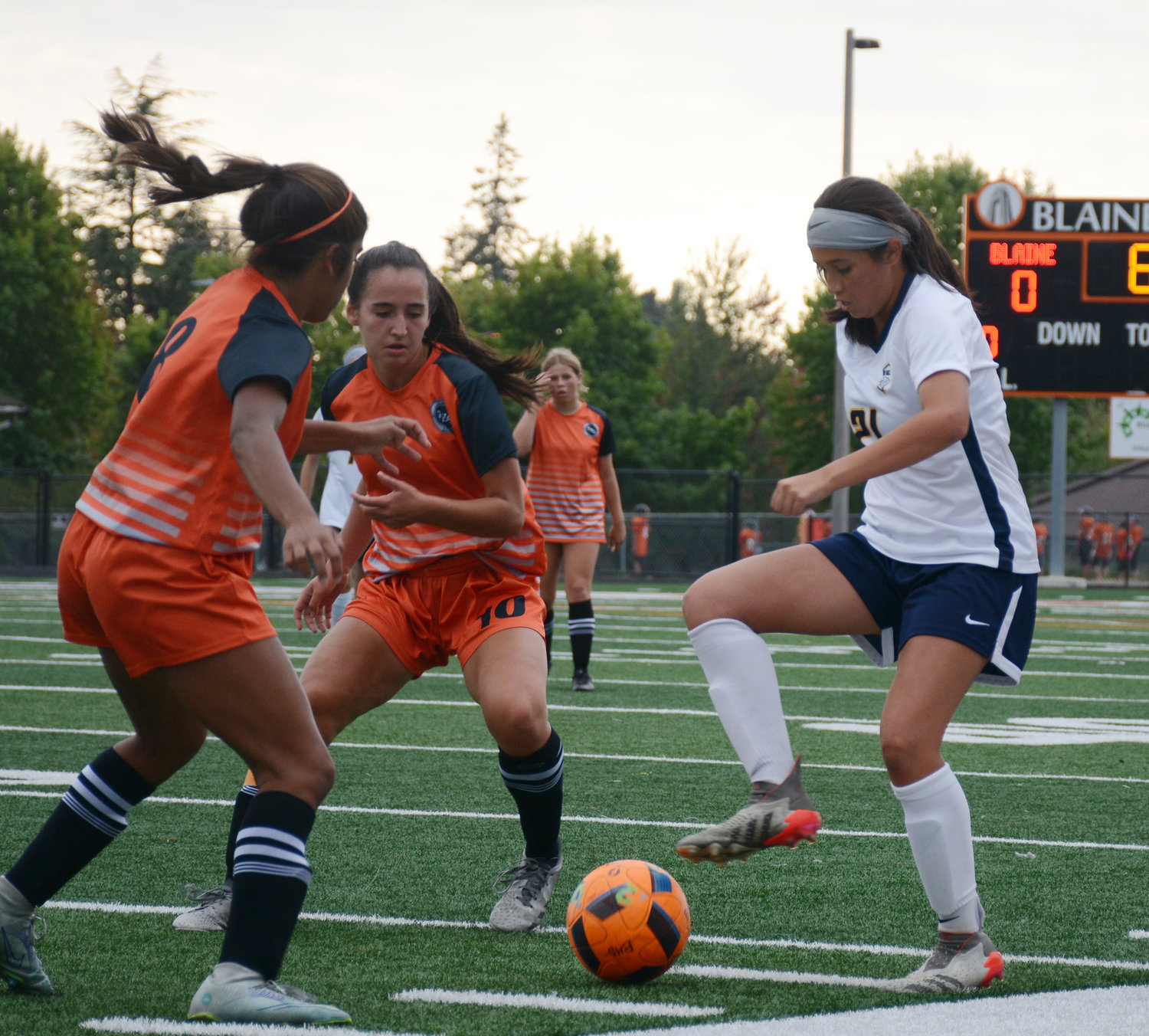 The Lady Borderites lost 4-1 to Burlington-Edison in their first home game of the season on September 15.
Photo by Ian Haupt 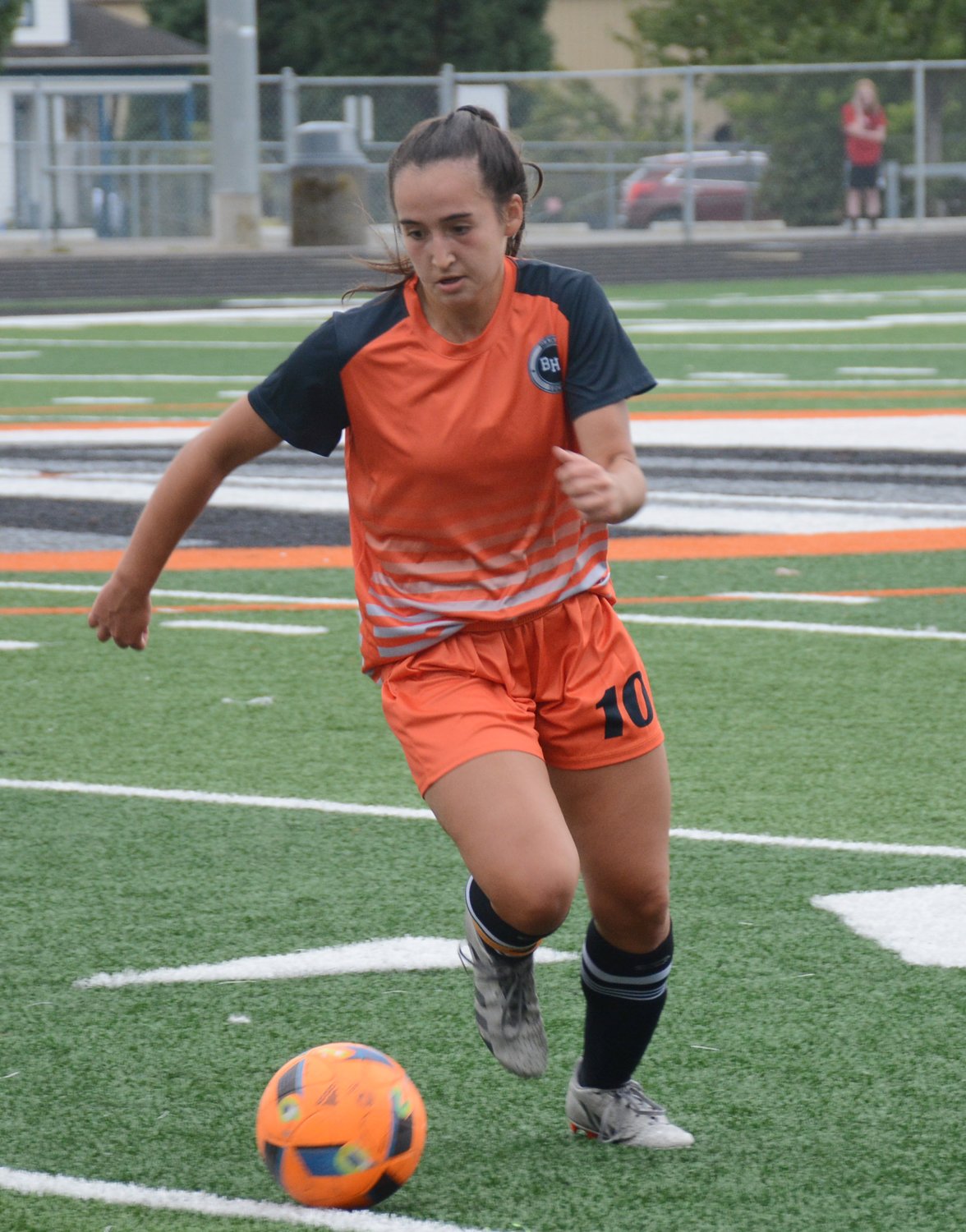 Evellina Yuryev dribbles through midfield in Blaine’s 4-1 loss to Burlington-Edison on September 15.
Photo by Ian Haupt 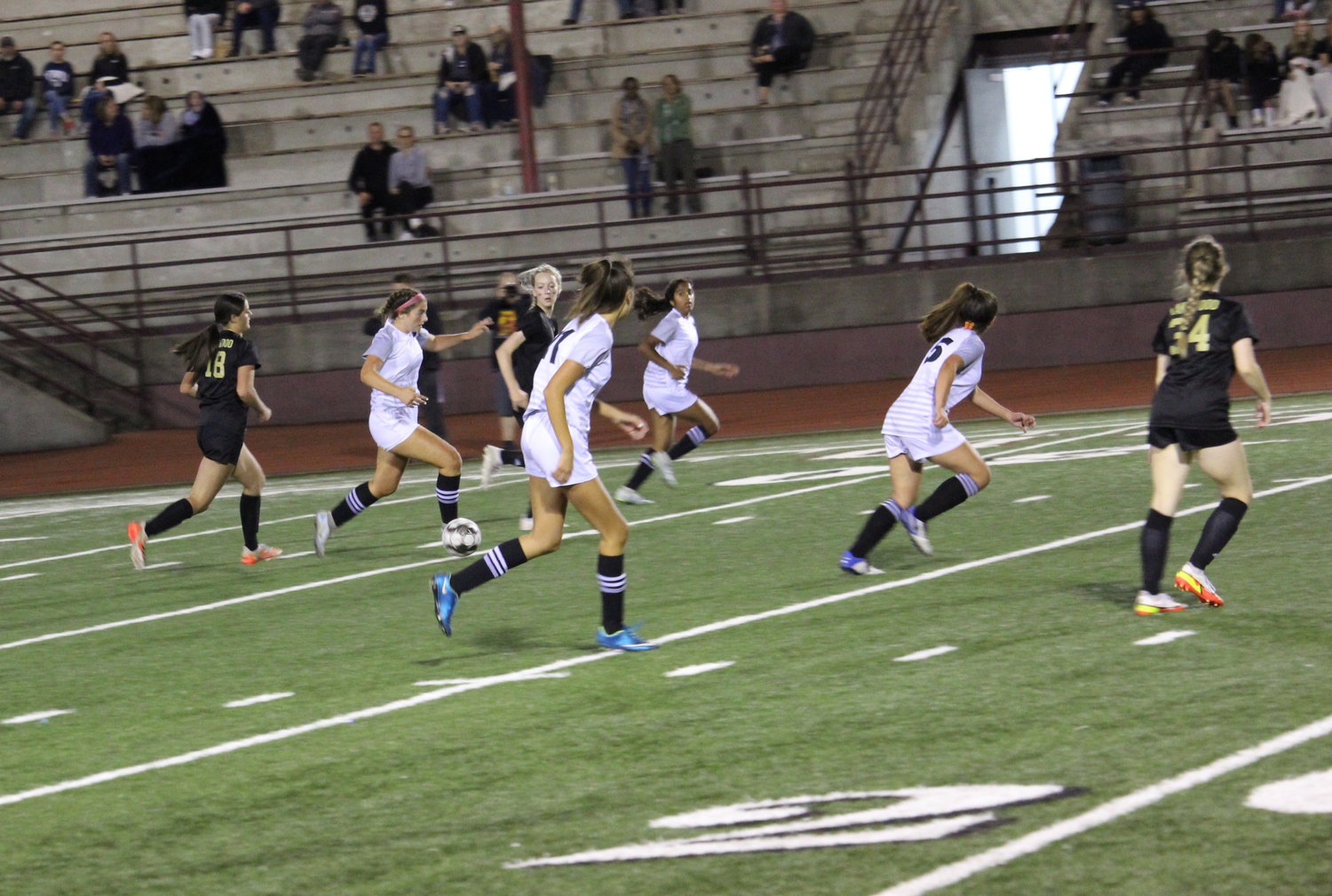 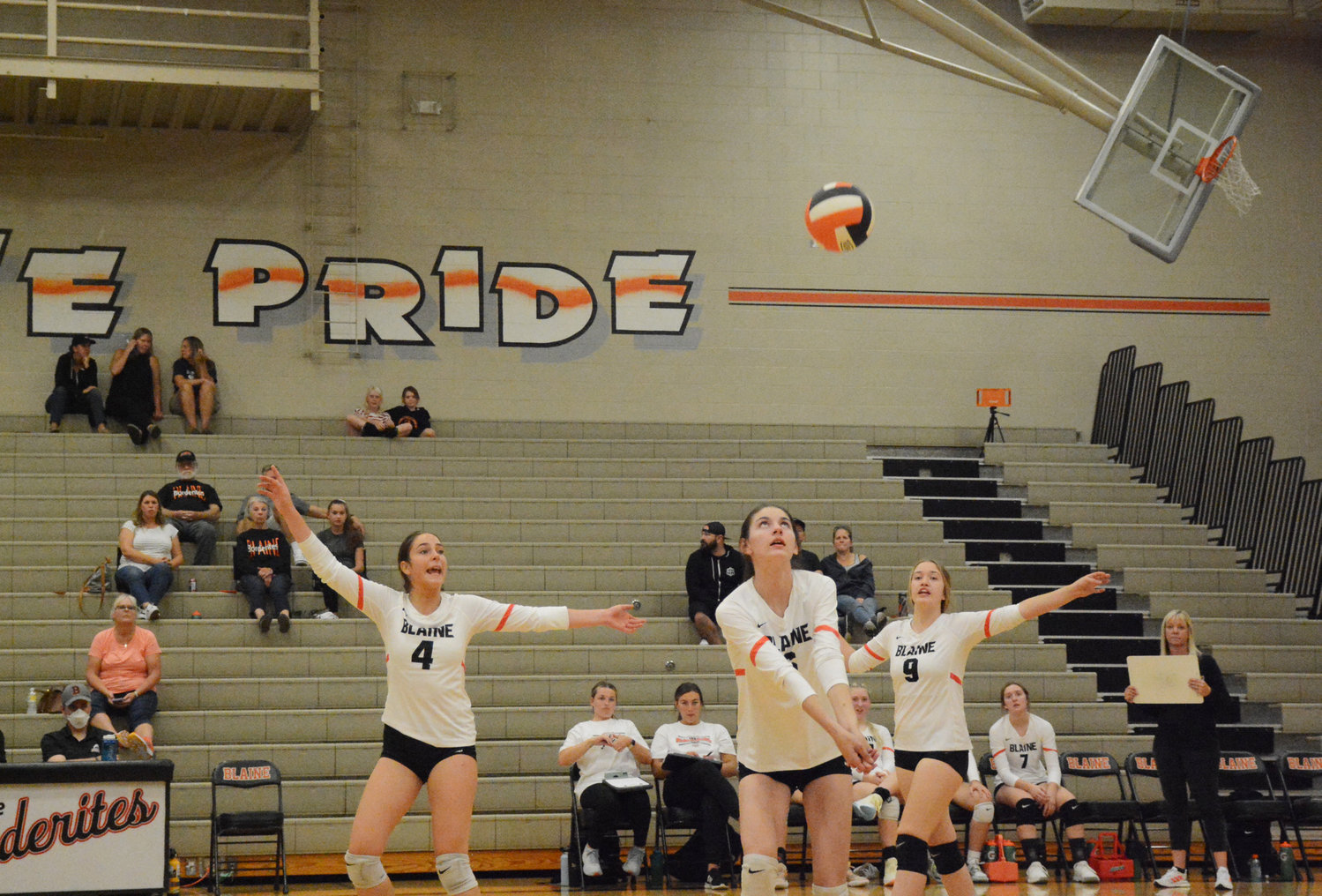 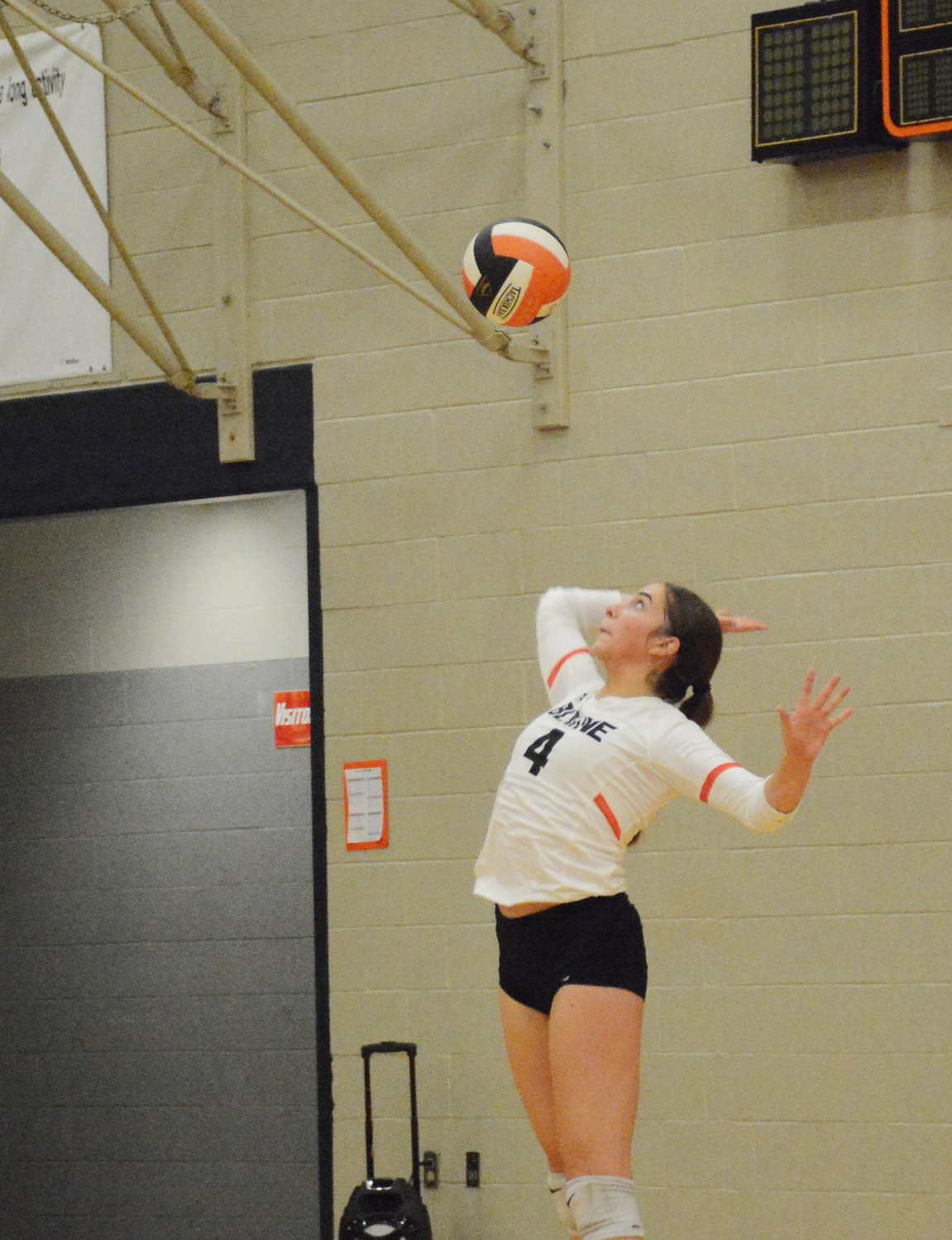 Gillian Rea serves in the Lady Borderites’ 3-0 loss to the Lions on September 20.
Photo by Ian Haupt
Previous Next
Posted Wednesday, September 21, 2022 3:56 pm
By Ian Haupt

Blaine girls soccer got its first win of the season on the road September 19. The Lady Borderites beat Lakewood 3-0 with goals from senior Kristina Roby, freshman Beatrice Dickson and sophomore Juliana Zuzarte.

Head coach Gio Quesada said he was happy with how the team played. The team put a lot of pressure on Lakewood and really dominated the first half, he said. With a young team this year, he said it’s important for players to split playing time. He said this way the team will progress tremendously over the season.

“The combination between experienced and inexperienced players is good,” Quesada said, adding that it will help many of the younger players improve.

Blaine lost 4-1 to Burlington-Edison in its home opener September 15. Sophomore goalkeeper Larissa Pluschakov had a strong game in goal but the Tigers offense was unrelenting. The Lady Borderites built momentum in the second half, creating multiple chances. Roby scored with about 10 minutes left in the game.

The Borderites traveled to Vashon Island September 16 where they lost to the Pirates 17-6. Blaine outgained the Pirates but lost after giving up a touchdown and field goal shortly after breaking the deadlock in the second quarter.

Senior quarterback Kael Evinger found junior Hunter Vezzetti on a back-corner fade from nine yards out to open the scoring. The Borderites would struggle to score again as Vashon responded immediately with an 83-yard touchdown pass.

They are back at home Friday, September 23 against King’s High School at 7 p.m. Blaine is 0-3 this season.

Blaine lost at home in three straight sets to Lynden September 20 on the back of a 3-0 loss to Ferndale September 14.

Blaine’s co-op team with Ferndale has a meet at Forge Pool in Lynden at 3:30 p.m. Thursday, September 22. The team’s schedule can be found at bit.ly/3U5exL8.