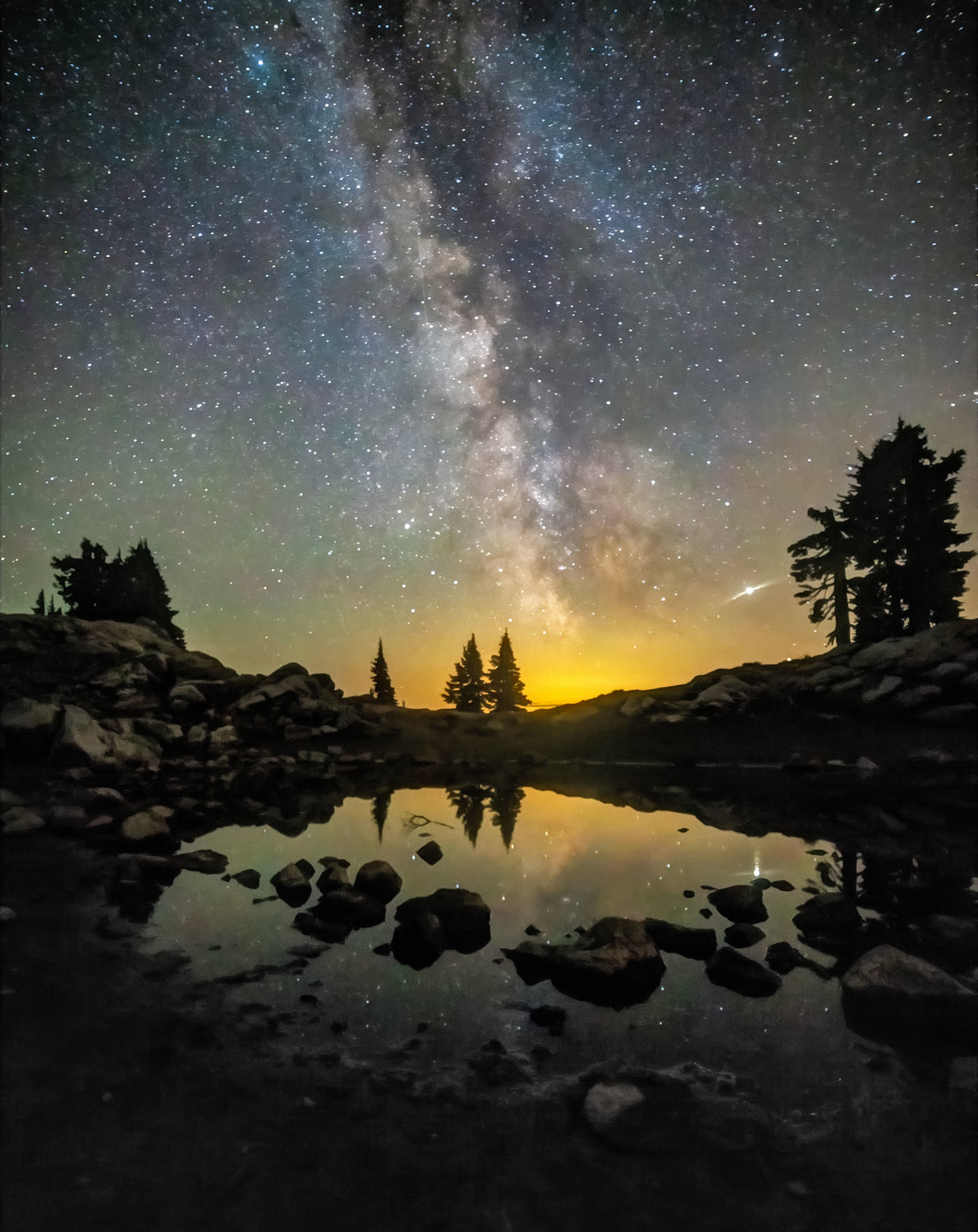 On a clear night in North Cascades National Park, one can see nearly 3,000 stars, according to park service research. Author and astronomer Bob Berman figures an observer has to be able to see about 450 stars to appreciate the night sky. In other words, here in the Pacific Northwest, we have access to wonderful stargazing.

But with Vancouver and Seattle so close, the North Cascades aren’t immune to light pollution and many other places in the West are darker. If willing to travel, darker skies can be found in east-central Oregon, Idaho, Death Valley, parts of southeastern Utah and Arizona, according to lightpollutionmap.info.

Whatcom Association of Celestial Observers (WACO) president Justin Katsinis said, for Whatcom County residents, Artist Point is the spot to go. Astronomers and enthusiasts will travel east on Highway 20 to get to darker skies but Artist Point has the most accessible dark sky with a large horizon in the area.

Sometimes meeting at Heather Meadows to avoid crowds, WACO runs observation nights at the end of Highway 542. But even that can be a long way to travel if stargazing regularly, so they hold telescope events closer to town as well.

The group has partnered with Whatcom County Library System to host telescope viewing nights at the Blaine and Lynden branches. Those began over the summer. They also host monthly Telescopes in the Park nights in a variety of locations, most recently at Boulevard Park.

Members bring their telescopes to share with others to view and learn about stars, planets and interstellar formations together. Katsinis said they often rely on foot traffic at those events. The group welcomes newcomers and is pleased to share their telescopes and passion with others.

“Really the fun one is when you get kids or even adults that haven’t been able to have that opportunity,” Katsinis said. “Then you’ll explain to them how astronomy works and how the planet rotates and what’s visible from land … it’s very rewarding for most of the group and people that come down.”

Katsinis said the number of telescopes at their events range from three to 10, all with a wide range of viewing capabilities. He said at the last Telescopes in the Park they had three community members bring their own telescopes to ask help from members on how to use them.

For those looking to get involved, or do some stargazing of their own, Katsinis said good viewing is upon us. International Observe the Moon Night is Saturday, October 1. WACO will be celebrating at Zuanich Point Park.

Planets also start to come up from the horizon in the fall, he said. Saturn, Jupiter and Mars come up around 10 p.m. this time of year. He also said the Orion Nebula off of the Milky Way is fascinating target.

“As far as astronomy goes, winter is a great time to get out and look,” Katsinis said. “It does get cold, and cloudy and rainy, but we usually get some really clear skies, and there’s a lot of good stuff. Especially when there’s no moon.”

• Artist Point: A classic – Whatcom Association of Celestial Observers regularly host star parties at Artist Point, at the end of Highway 542, and sometimes down at Heather Meadows to avoid crowds. Artist Point has an exceptionally dark sky, and considering how easy it is to get to, it’s the WACOs favorite.

• McDonald Park: Designated a Dark Sky Park by the city of Abbotsford, B.C., McDonald Park is another location that shines more for its convenience than for exceptional darkness. The park is between Abbotsford and Chilliwack and about an hour from downtown Vancouver.

• Telescopes in the Park: Every month and weather permitting, Whatcom Association of Celestial Observers gather at a park in Whatcom County to view stars and planets through telescopes. Check their Facebook page at bit.ly/3PS3FwP for dates and location.

Oliver Lazenby contributed to this story through previous reporting.