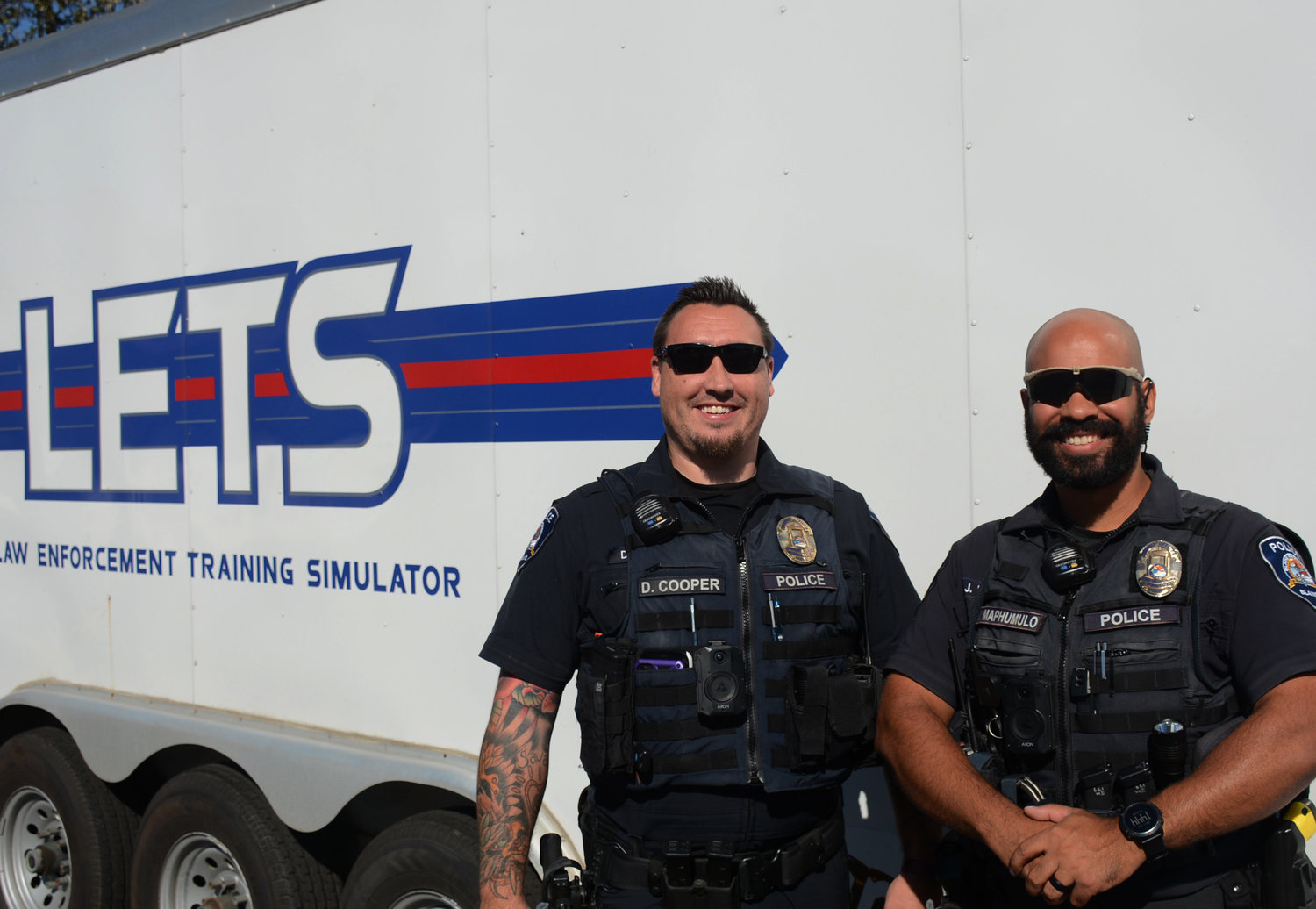 Two women and a kid run out of a house and one says, “There’s a man in there with a gun.” Wondering what else they might have said – “And he’s going to shoot him?” – I’m brought into the house.

Easing around a corner to the hallway, I see a balding man who looks to be pointing a gun at someone in a room at the end of the hall. I can’t see the other person or the gun. A second later, I can see the gun. I point my gun at him and yell, “Put the gun down. Drop the gun!” He looks at me and drops the gun.

The simulation restarts, and this time the man turns and shoots. Standing in the dark room of a trailer parked in the Blaine Library parking lot, having shot two rounds over the head of the man on the screen after he shot two at me, I found myself flustered.

Jason Valentine, a retired Washington State Patrol trooper of 31 years, who’s running the training, debriefs me after each scenario. He asks me why I did what I did and points out the consequences, but, more importantly, has me articulate a reason for my actions.

“We can only go based on what we know,” Valentine said, as he asked whether I knew if the man with the gun was the intruder or the homeowner (I didn’t). But whatever actions you take, he said, you have to be able to justify them.

For the actual training, Blaine Police Department (BPD) officers and law enforcement across the state go through five different virtual scenarios that have them use their past training and personal judgment to navigate tense situations. They are given prop weapons, a handgun, Taser and rifle, varying for each scenario, and prepped with little information – trespass or active shooter – about what they are about to encounter.

Clear Risk Solutions, an insurance program administration and risk management company based in Ephrata, was contracted as a third party administrator. They offer the training to police departments throughout Washington. BPD does the training annually.

I watched as BPD officers Jordan Maphumulo and Devin Cooper dealt with a man dousing himself in gasoline, a man trespassing and later found to be kidnapping someone, a distressed officer in a locker room, and two active shooter scenarios.

In one of the active shooter scenarios – a school shooter – the simulator takes the trainee into a classroom with four people standing around one person lying on the floor. One of the people standing, who appeared to be a student, is pointing a gun at the person on the ground.

As Cooper went through this scenario, I asked Maphumulo what he was looking for when he did it. “The threat,” he said.

He said the first place he looks at are the hands. When I got out of my car to join them for the training session, he said he immediately looked at my hands and belt. I was carrying a D7100 Nikon and reporter’s notebook.