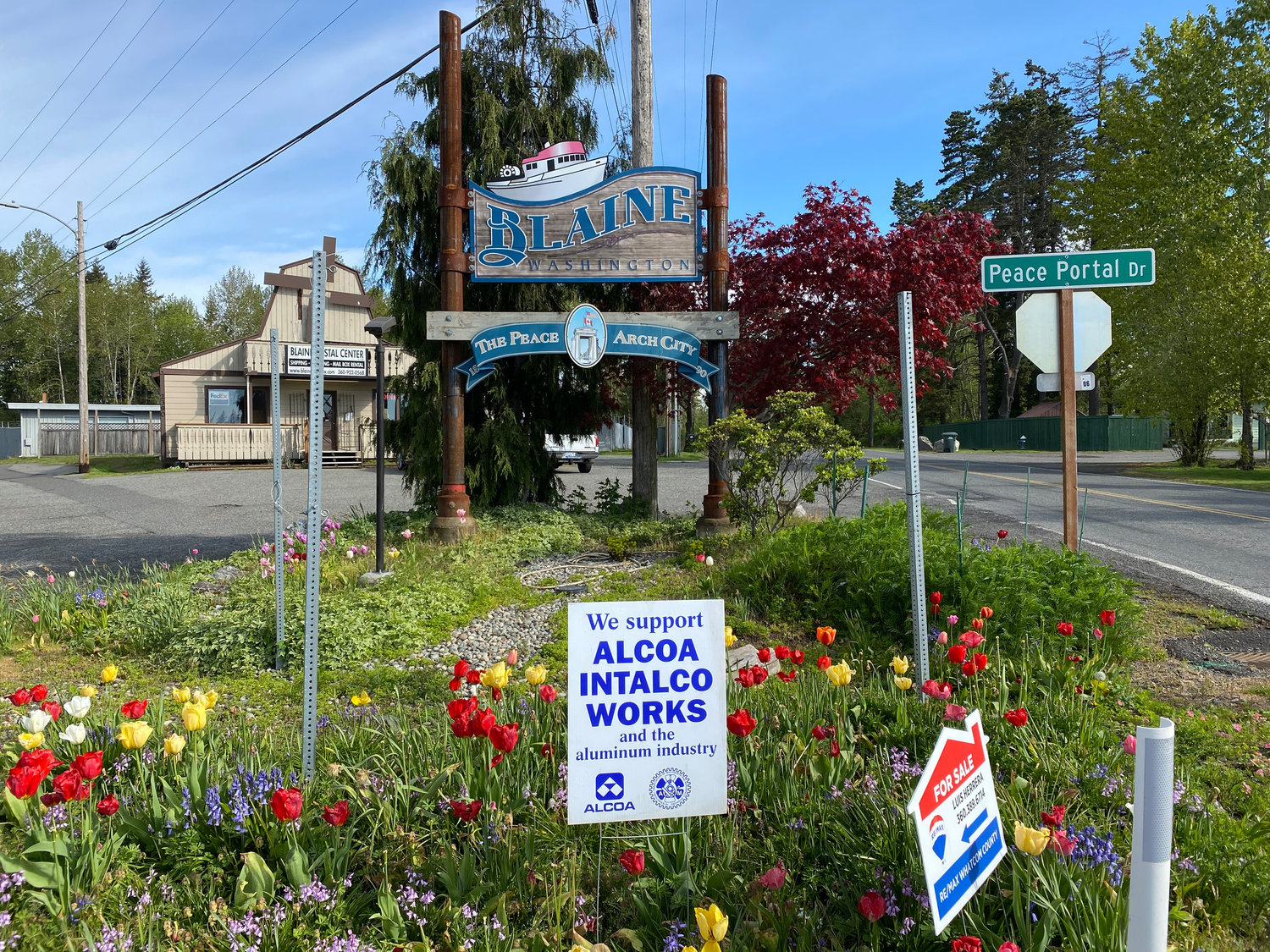 Signs were put up in Blaine following Alcoa’s April 2020 announcement that its Intalco Works smelting facility in Ferndale would curtail.
File photo
Posted Wednesday, May 25, 2022 5:18 pm
By Grace McCarthy

Intalco union members have entered a contract with Blue Wolf Capital Partners, prospective buyer of the idled Alcoa smelter in Ferndale. The labor deal marks one step closer to restarting the nearly closed smelter, with the final – and most cumbersome – leg being securing an energy contract with Bonneville Power Administration (BPA).

Alcoa slowed production of its Ferndale plant in summer 2020 and put its nearly 700 employees out of work after low aluminum prices made the business less profitable. Only 12 union employees are left maintaining the facility for routine maintenance, IAMAW District 160 business representative Luke Ackerson said in an email to The Northern Light.

Ackerson said he felt hopeful about the labor agreement after previous negotiations with Alcoa had been contentious and didn’t send a positive message to the workforce.

“Negotiating with Blue Wolf was refreshing,” he said. “They were very fair and made a lot of effort to build trust throughout the process.”

The union agreement includes and sets out parameters for performance bonuses, paid sick leave, paid vacation, overtime distribution and new employment wages. It includes quarterly retention bonuses and a 401(k) contribution and match. Returning employees will come back to their wages and benefits. As well, employees and retirees will get a payout if the Ferndale smelter is sold again, something that wasn’t provided before.

But Ackerson said he isn’t optimistic the labor deal will see its way through, as he sees BPA needing to make significant changes in the next week or negotiations will fall flat.

Blue Wolf is reliant on a BPA agreement to supply large amounts of power to restart the Ferndale facility. However, BPA officials have said Blue Wolf can’t purchase the power at the below-market rates Alcoa had been receiving because Blue Wolf is not one of the companies listed in the 1980 Northwest Power Act. The two need to find a deal that is profitable for Blue Wolf, which will still need to find other energy suppliers as BPA can’t provide all of the smelter’s power.

“Negotiations with BPA are in the final stages and the outcome does not appear promising at this point,” Ackerson said. “BPA has been keeping Blue Wolf at arm’s length for much of the process, they took a position early on in negotiations and they haven’t moved from that position. Unless something significant changes in the next week, it appears the smelter will not operate again.”

Ackerson said he was thankful for state legislators, with the driving force of state representative Sharon Shewmake (D-Bellingham), for securing $10 million for environmental improvements. He added he hasn’t seen the same support from U.S. representatives, which he believes could have greatly impacted their efforts to reopen the facility.

“Our members need elected officials in the state of Washington and Washington, D.C. to help bring relief for hundreds of working families in Whatcom County,” Allen said in a statement. “The members earned this contract that will serve a model in the aluminum manufacturing industry.”

BPA spokesperson Doug Johnson said BPA is still talking with Blue Wolf but no deal has been made.

“There were some items in the existing agreement that were prohibitive to a quick restart, and they needed to be adjusted,” Ackerson said. “Completing the labor negotiations also gave the Blue Wolf team the ability to focus on the power agreement negotiations with BPA and other entities.”