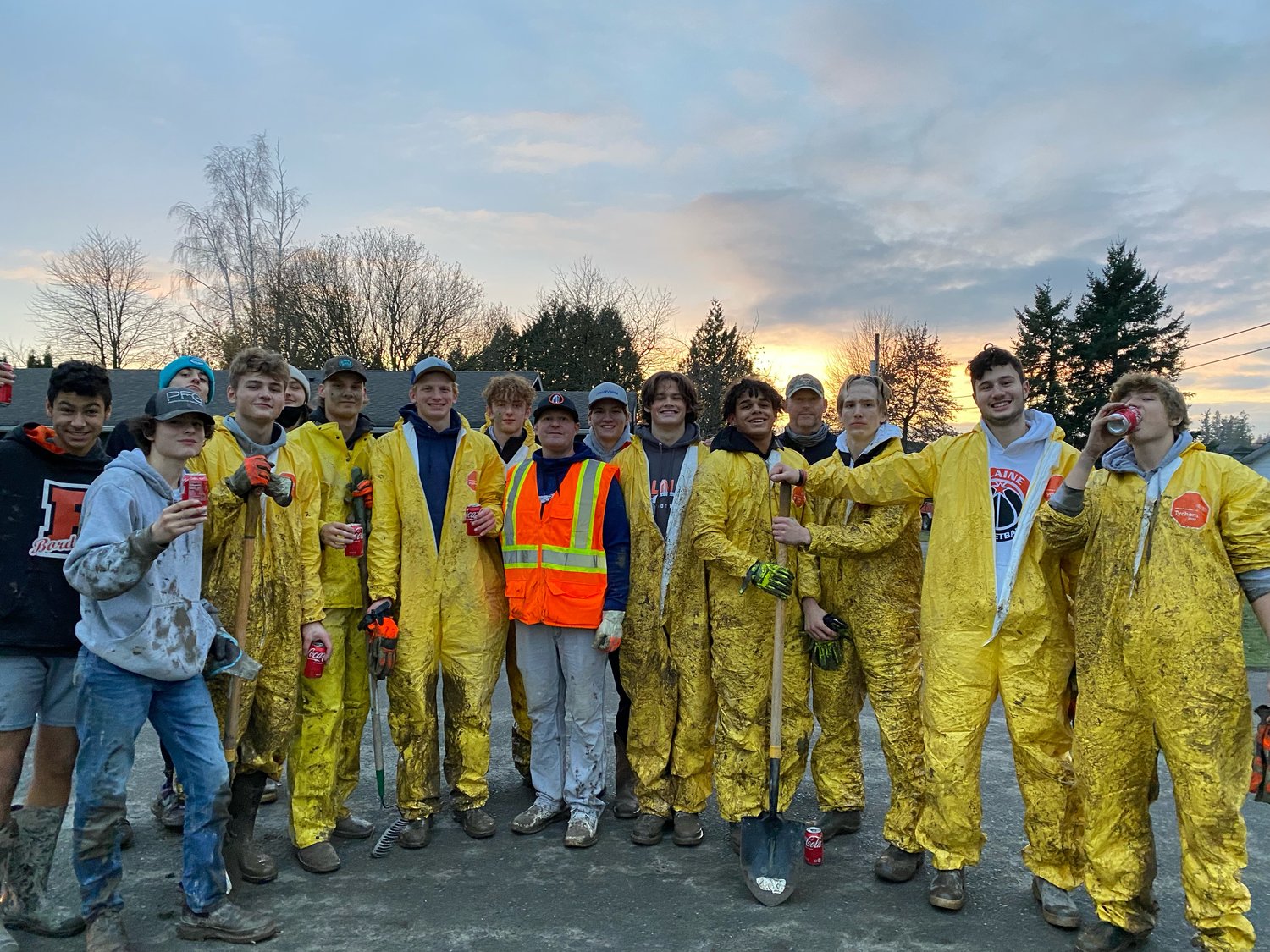 Almost as immediate as the flooding began, an outpour of community support was palpable throughout Whatcom County as residents began repairing damaged homes.

Social media became a community hub and information center in the midst of chaos as neighbors offered any support they could give to fellow neighbors. The Nooksack River Flood Disaster November 2021 Facebook page gained 7,500 members within days of being created on November 15. Almost as immediate as requests for assistance were there responses. A Custer resident offering his free RV, another their Thanksgiving turkey.

Pop-up daycares were created nearly overnight across the county for parents to leave their children as they salvaged homes. Whatcom County cities put out calls for any volunteers to gather and they would be assigned a job.

Roads in normally quiet east county roads were packed with trucks hauling debris and household items. People offered coffee and snacks along city roadways as others loaded their vehicles with water and essential supplies to give away.

“I asked who would be willing to help and hands just shot in the air,” basketball coach Brett Farrar said. “Everyone jumped at the opportunity. Those kids said they were willing to serve the community in need and didn’t ask questions.”

Farrar said the team helped an entire ground level of an apartment complex in addition to about 15 homes. By the end of the day, Farrar said teammates were already talking about wanting to help more.

Back in Birch Bay, The Bridge Community Hope Center had experienced over 80,000 gallons of flooding at its 4815 Alderson Road location on November 15, but had everything cleaned up by the middle of the week thanks to volunteers. Through it all, the nonprofit organizers continued to help a few dozen people needing assistance from the flood in addition to its current client base.

The Bridge volunteers sorted clean and brand-new clothing so they were ready for families in need, donated mattresses, and collected tents for people experiencing homelessness in Bellingham. They’re also working to network volunteers with people needing assistance after the flood.

The Bridge plans on meeting the community’s needs as they develop, said Lee Connors, executive director of The Bridge. This could mean getting people blow-up mattresses while they’re in transitional housing, but eventually furniture once they have secure housing.

“What we’re gearing ourselves up for is to be a sustainable resource for the community and outlying areas to come to us and get help for food, clothing and things like that,” Lee Connors said. “There’s already a lot of needs in the outlying areas of east county.”

The Bridge will continue servicing Birch Bay to make donations accessible to residents who can’t get to east county.

“You don’t have one fire hydrant for the entire county in the middle,” Brian Marcus, who volunteers with The Bridge. “You have them all over the place so they’re where they’re needed.”

“We want to be able to reach as many people as we can with furniture and items to help cover their losses,” Cardinale wrote in an email to The Northern Light. The store, open from 11 a.m. to 7 p.m. Tuesday-Sunday, also has a donation jar.

People can still donate to Whatcom Community Foundation’s Resilience Fund, gifts matched up to $115,000. Contributions can be made at bit.ly/3oA7cUZ.

After a long, tiresome weekend for many, there’s more work to do in the county. Mud-drenched driveways, pools of water still covering Sumas’ baseball field, cars overturned in blueberry fields and a makeshift garbage dump piled high with ruined appliances next to the Everson shopping center were a few of the scenes remaining the night of Sunday, November 21.

But for every water-laden item, there seemed to be someone offering to haul it.

“There’s been this need for people to reconnect during the pandemic,” said Rosemary Connors, secretary for The Bridge. “A silver lining in the flood is people are starting to experience kindness, love, help and assistance.”