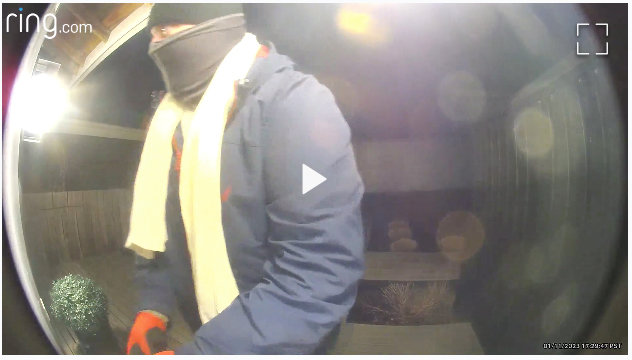 A Birch Bay Drive home was broken into around 5:30 p.m. January 11, and Whatcom County Sheriff’s Office (WCSO) is asking residents to report any information they have on the incident.

Deputies responded to a residential burglary report in the 7000 block of Birch Bay Drive, according to a January 17 WCSO Facebook post. The suspects fled the scene, but the homeowners were able to supply video footage of the break-in, which was included in the post. The suspects’ identity remained unknown as of January 17.

Both suspects were caught on a Ring home security camera in the front yard of the property while one was prying the front door open. The video, which can be viewed at bit.ly/3INwue6, shows the suspect trying to open the door for over a minute.

The male suspect was wearing a navy blue rain jacket, black hat, gray neck gaiter and red gloves. He also has a white scarf, cloth bag around his neck. The other suspect also wore face coverings and a geometric-patterned jacket, brown pants and white shoes.